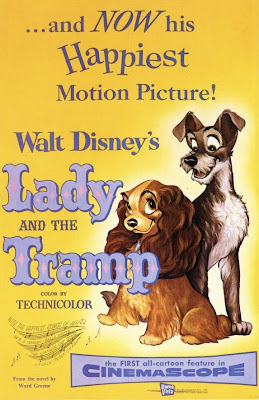 In 1937, animator and story man Joe Grant showed Walt Disney a drawing of his springer spaniel puppy named Lady. Intrigued by the drawing, Walt asked him to create a storyboard based on the dog. The original story involved the spaniel being replaced by a baby and a mother in-law with cats. Walt was unsatisfied with the story and the project was shelved. Years later, Walt read a story by Ward Greene called Happy Dan: The Cynical Dog that revived his interest in the project. Walt decided to add a cynical male dog into the previous story and the film began to take shape. Since this was the first time that a Disney animated film wasn't based on a popular book or fairy tale, Walt asked Ward Greene to write a novel that was released before the film, but it is actually the novel that is based on the Disney story, not the other way around (despite what the opening credits and original poster say).

For the songs in Lady and the Tramp, Walt went to pop singer/songwriter Peggy Lee and her writing partner, Sonny Burke. The only song they didn't write was "Peace On Earth," which was written by Oliver Wallace, who wrote the score. As a result of Peggy Lee's work on the songs, she was cast as the voice for multiple characters. The character Peg was named after her, but she also voiced Si and Am the Siamese cats, Mrs. Darling and was the singing voice of Lady. Barbara Luddy provided the speaking voice for Lady and would go on to voice Meriwether in Sleeping Beauty and Kanga in Winnie the Pooh. Verna Felton voiced Aunt Sarah, who had also voiced the Queen of Hearts in Alice in Wonderland and the Fairy Godmother in Cinderella.

Lady and the Tramp was the first animated film ever made in CinemScope widescreen and was Disney's second film to utilize the ultra-wide format, the first being 20,000 Leagues Under the Sea. Since the camera and film were bigger, the paper the animators used and the backgrounds had to be bigger. This increased the cost of production and the length of time it took to animate. In addition, the animation was filmed twice, in CinemaScope and fullscreen for theaters that weren't yet equipped with CinemaScope. The animation alone took 3 years to complete.

The film opens on Christmas Eve at the turn of the century. "Jim Dear" gives his wife, "Darling", a hatbox with a puppy inside, which they name Lady. Lady quickly grows up and when her owners begin to act differently, Lady assumes that she has done something wrong. It turns out that they are expecting a baby. As Jock and Trusty, the neighbor dogs, explain what a baby is to Lady, a stray dog named Tramp overhears and interrupts to explain that babies ruin homes for dogs. The baby is born and shortly after, Jim Dear and Darling go out of town, leaving Aunt Sarah in charge. She doesn't let Lady anywhere near the baby and when he two cats Si and Am make a mess, Lady is blamed. Aunt Sara tries to put Lady in a muzzle, but she runs away and Tramp saves her. He takes Lady to dinner at Tony's, where they are serenaded as romance blooms between them. The next day when Tramp turns his back, the dog catcher finds Lady and takes her to the pound, where she learns that Tramp is known for being a heartbreaker. When she is picked up, Aunt Sarah ties her to the dog house. Lady is chained up and is unable to catch a rat that gets into the babies room, so Tramp enters the house to fight it off. Aunt Sarah finds Tramp after he defeats the rat, but she doesn't realize what he did and calls the pound. To save Tramp from being put down, Jock and Trusty chase after the dog catcher's truck to free Tramp. Trusty is injured in the process, but they are successful and when Jim Dear and Darling find the rat and realize that Tramp saved their baby, they adopt him. The film ends at Christmas as the baby is playing with Lady and the Tramp's puppies.

Lady and the Tramp premiered on June 16, 1955, in Chicago. Surprisingly, critics generally bashed the film. Their general gripe was that for an animated feature about dogs, the story was very mature and much more for adults. Some had complaints about the animation being "below par" for a Disney film, which is ridiculous because it is one of the most beautiful films the studio has ever made. Despite the lack of critical acclaim, the film was a big success. Audiences loved it and kept going to see it. It was re-released to theaters four times before making its VHS debut in 1987.

I couldn't get enough of Lady and the Tramp as a kid. By the time I was old enough to watch it, Disney had taken it out of print. Luckily the neighbors had a copy and they let me borrow it several times. It truly is a pleasing film on all levels. The characters are wonderful and memorable. You will wish that they were your pets. The music is splendid and you're sure to have one of the songs stuck in your head after watching it, most likely "Bella Notte," which has become a staple Disney song. The story is charming and it tugs at your heart strings. To put it simply, Lady and the Tramp is everything that a Disney animated film should be. The animation and art direction are exquisite as well. Mary Blaire had already left the studio to pursue an independent career, so the art direction was primarily designed by Eyvind Earle, who would later achieve great success as an artist as well. Guests at Walt Disney World might notice a restaurant on Main Street at the Magic Kingdom called Tony's Town Square. The restaurant is themed to the film and is meant to be owned by Tony. If you look carefully outside, you will see pawprints in the concrete with a heart drawn around them from Lady and Tramp's first date.

Lady and the Tramp is currently available on Blu-Ray as a Diamond Edition. The film has been fully restored in its original CinemaScope aspect ratio and comes with some great bonus features, including a making-of documentary, the original storyboards that Joe Grant made and a peak inside Walt's story meetings. A single-disc DVD is currently available, but it is very light on bonus features (only has an introduction and a game). It was previously released on DVD in a 2-disc Platinum Edition with lots of bonus features, so if you haven't upgraded to Blu-Ray yet, I recommend you track down the Platinum Edition. Most of the bonus features from this set are also included on the Blu-Ray disc. Disney also released a 3-disc combo pack that adds a digital copy.

Email ThisBlogThis!Share to TwitterShare to FacebookShare to Pinterest
Labels: Lady and the Tramp