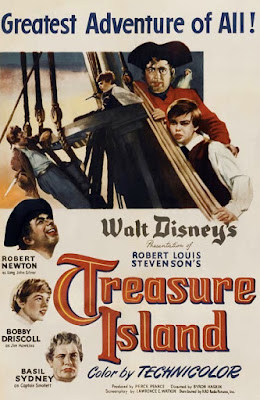 During World War II, many Disney films were released in the U.K. and made a good chunk of money there. However, the government wouldn't allow the money to be sent back to the U.S. and it had to be spent in the U.K. So after the war, Walt Disney had a lot of money that he couldn't use, so he decided to start making live action films there. His first choice was Robert Louis Stevenson's classic novel, Treasure Island. Walt had previously wanted to adapt it as an animated feature, but quickly decided that there was no need for it to be animated and waited until he was capable of making live action features. Treasure Island was the first Disney feature film without big animated sequences.

For the role of Jim Hawkins, it made sense to cast Disney contract star Bobby Driscoll, the star of Song of the South and So Dear to My Heart. However, his work permit in England was for 3 months, so all of his scenes were shot first. British actor Robert Newton was cast as Long John Silver, a role he would reprise in a non-Disney sequel and a television series. Newton is credited with inventing the stereotyped pirate speech that is commonly used today. The rest of the film was cast with mostly unknown actors. An actual ship was used as the Hispaniola and filming aboard the ship was done at sea. This was the first color film adaption of the classic novel, but there were several black and white versions before it.

The film starts with young Jim Hawkins taking care of his mother's inn. Pirates arrive to give William Bones, who is staying at the inn, the black spot indicating that they are coming to kill him. It turns out that they are after a treasure map that Bones has and before dying, he gives it to Jim. Jim shows the map to the Squire who decides to lead an expedition to the island to find the treasure and Jim is invited along as cabin boy. Jim takes a liking to Long John Silver, the ships one-legged cook, but when one of the crewmen falls overboard, Jim overhears some of the crew, including Long John Silver, talking about how they killed him. It turns out that most of the crew are pirates and Silver is their captain. Jim tells the Squire and the Captain about the pirate's plan to takeover the ship and get the map and chaos ensues as they go ashore. Jim becomes Silver's hostage. On the island, Jim escapes and finds Ben Gunn, a crazy old pirate who was marooned. The Captain and Squire meet up with Jim at an old fort on the island where a war ensues when the Captain refuses to hand over the map. Jim sneaks back to the ship to run it ashore so the pirates can't leave without them. When he is injured, Silver saves him and takes him to the Doctor. Silver strikes a deal to get rid of the rest of the pirates by leading them to the treasure site, which has been emptied. The Squire, Captain, and Doctor attack the pirates just as Ben arrives, who took the treasure to his cave. As they prepare to leave the island, Silver is set to be taken back to England for a trial, but he springs a gun on the crew and escapes with the treasure and a little help from Jim.

Treasure Island premiered on June 22, 1950, in London. For the most part, critics were displeased with Disney's adaptaion, claiming that it made to many alterations to the story. However, it is considered one of the most faithful film adaptations to date and fans of Stevenson's work have said that the alterations were in the spirit of the original book. The film wasn't a financial failure, but it wasn't a big success either. It was later shown several times on TV. Disney re-released it theatrically in 1975, but the MPAA gave it a PG rating for violence, so the studio cut two scenes out and resubmitted it, earning a G rating. All of the VHS releases used the edited version.

Treasure Island is a thoroughly enjoyable film. It is filled with great performances by all of the actors and the cinematography is excellent. While it wasn't nominated for any awards, many of the production team went on to win Oscars for later films. The story is exciting and for the 1950's, it is filled with a lot of action. Modern audiences might be shocked to see some blood in a Disney film and a scene in which Jim shoots a pirate in the face, but those scenes only add to the excitement of the film and help to further immerse you in the severity of the situation. This was not the only Disney film adaptation of Treasure Island. Disney produced a version in 1996 starring the Muppets called Muppet Treasure Island and Walt Disney Animation Studios adapted it as an animated feature set in space in 2002 called Treasure Planet. Pirates have played a big role in Disney film history, but Treasure Island was Disney's first pirate movie.

Treasure Island is currently available on DVD in its full, unedited, original theatrical cut. It is also available on iTunes in HD.