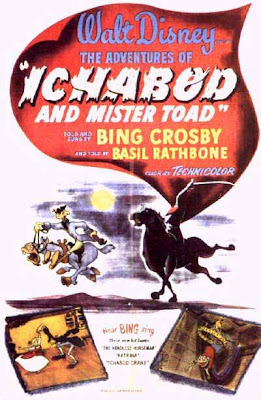 Prior to World War II, Walt Disney had been planning to adapt many classic stories into feature animated films. Two literary classics he was considering adapting as animated features were The Wind in the Willows by Kennith Graham and The Legend of Sleepy Hollow by Washington Irving. After the war, and years of development on both projects, it was determined that the stories were better suited as 30 minute shorts rather than 70 minute features. And since it was easier to sell long shorts as package features, Walt Disney decided to combine the shorts into one film. The original title was Two Fabulous Characters, which was changed to The Adventures of Ichabod and Mr. Toad.

The film opens on a private library as a copy of The Wind in the Willows flies off the shelf and opens up. Basil Rathbone narrates the story as the illustrated pages come to life. Rat and Mole are summoned to Toad Hall by Badger because Toad is always out with his horse, Cyril. While out, Toad sees a motor car and becomes obsessed. Toad is arrested for supposedly stealing a car. During the trial, it turns out that Toad traded Toad Hall to the weasels for the car, but when Mr. Winky testifies, he says that Toad stole the car and he is thrown in jail. On Christmas, Toad breaks free. With the help of Rat, Mole and Badger, they sneak into Toad Hall to get the deed back from Winky and the weasels. They get Toad Hall back, but Mr. Toad is quickly onto a new obsession, air planes.

Back in the library, The Legend of Sleepy Hallow opens and Bing Crosby narrates the story. The oblong Ichabod Crane has just moved to Sleepy Hallow to be the schoolmaster. He meets Katrina and falls head over heels for her. This causes a feud between him and Brom Bones, Sleepy Hallow's resident he-man. At Katrina's Halloween party, Brom Bones tells the legend of the headless horseman to scare Ichabod. On Ichabod's ride home that night, the headless horseman appears and chases him down. The next morning, Ichabod's hat is found next to a smashed pumpkin, but he is never seen again.

The Adventures of Ichabod and Mr. Toad was released on October 5, 1949 without a formal premier. Critics were generally pleased with the film, despite their distaste of the package feature concept, and the film enjoyed moderate success at the box office. It was the last package feature at the studio since Walt finally had the resources to resume animated feature production. Cinderella was already in production while Ichabod and Mr. Toad was being completed.

Of the six package features made by Disney, The Adventures of Ichabod and Mr. Toad is the most enjoyable. Both sequences are very well done and even the animation quality is better, although it's still not feature quality. The music is better as well. "Nowhere in Particular" from Mr. Toad's sequence is sure to get stuck in your head. And the Bing Crosby songs in Ichabod's portion are great. However, Disney has had so many great and memorable songs that the music from this film has pretty much faded into obscurity.

This film was never re-released to theaters in its entirety. Instead, the two segments were split up and released individually in the 1950's with some minor editing. They were shown on TV countless times and both were released on VHS separately, but the full film wasn't seen again until it was released on laserdisc in 1990 and on VHS in 1999. A popular Disneyland ride is based on The Wind in the Willows portion of the film called Mr. Toad's Wild Ride. The attraction used to also be at Walt Disney World, but was removed in 1998. The Magic Kingdom also features a funnel cake shop in Liberty Square called Sleepy Hallow Refreshments that is a not to The Legend of Sleepy Hallow and their Halloween parade is kicked off by the Headless Horseman.

The entire feature is currently available on DVD, but it would be nice if Disney gave it a better restoration and re-released it on disc. A new restoration has been done and that version is available on iTunes in HD. In addition, The Wind in the Willows is available separately as part of the 'Walt Disney Animation Collection' where it is paired with other Disney shorts.

Email ThisBlogThis!Share to TwitterShare to FacebookShare to Pinterest
Labels: Adventures of Ichabod and Mr. Toad (The)