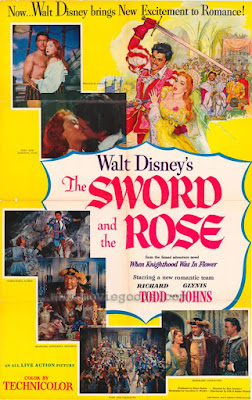 The Sword and the Rose was the third film made with the locked revenue from Disney films released in the U.K. during the war. Many of the people responsible for making the film also worked on the previous British Disney film, The Story of Robin Hood and His Merrie Men, including director Ken Annakin, producer Perce Pearce, and star Richard Todd, who played Robin Hood. Glynis Johns was cast as Mary Tudor. The Sword and the Rose was based on a novel called When Knighthood Was in Flower by Charles Major and was the third film adaptation, but the first in color.

The film takes place during the early reign of King Henry VIII. Henry is having Englishmen wrestle Frenchmen to find a suitable captain of the guard, which Mastor Charles Brandon wins. His first task is to deliver a message to the king's sister, princess Mary Tudor, who invites Charles to her ball. This sparks a fury in Duke Buckingham, who has been trying to woo Mary and sees Charles as a threat. Forbidden romance blooms between Mary and Charles as King Louis of France asks for Mary's hand in marriage. After a failed attempt to run away together to America, Charles is locked away and sentenced to death. To save Charles from the gallows, Mary agrees to mary King Louis with the agreement that after King Louis dies, she can marry whomever she chooses. Charles is tricked into attempting to escape, where he is stabbed and thrown into the Tames. Meanwhile, Mary is trying to bring about King Louis' death about sooner by making him do things he shouldn't, such as extensive drinking, dancing and horse back riding, which finally kills him. She calls for Charles to be sent to France and learns of his death. Duke Buckingham corners Mary, forcing her to marry him or the new king of France, but Charles is actually alive and has come to France to rescue Mary. A chase and battle ensues with Charles emerging as the victor. The two are quickly married as the film triumphantly ends on a happy note.

Walt Disney's The Sword and the Rose premiered on July 23, 1953. British critics bashed the film for being historically inaccurate. American critics didn't mind the liberties taken with historical facts, but didn't care much for the film itself. Audiences didn't flock to see it and it was not a success.

It's a shame that The Sword and the Rose failed to find an audience in 1953 because it is a great film. While based on historical figures, it is primarily a work of fiction which might be why people have a hard time enjoying it. But if you can let go of preconceived notions about the real history of the Tudor era, you will find a delightful romantic adventure sure to win your favor. The characters are intriguing and the actors do a first rate job bringing them to life. The costumes and sets are exquisite and while lots of matte paintings were used, they are done so realistically that you hardly notice them. Peter Ellenshaw did the matte paintings for all of Disney's British films from this period before moving to America to work for the studio full time. He painted more than 60 matte paintings for this particular film. The Sword and the Rose plays like a fairy tale, although not one for children. While there aren't any objectionable scenes, the story is simply too boring for kids. It contains no magical elements and is focused more on the romance than anything else. The true audience for this film is adults with an interest in period romance. The film's title is a metaphor for the characters. The sword is Charles and the rose is Mary. It really is a great film and it's sad that so few people have seen it.

The Sword and the Rose was released on DVD in December 2010 as a Disney Movie Club Exclusive. It is also available on iTunes.

Email ThisBlogThis!Share to TwitterShare to FacebookShare to Pinterest
Labels: Sword and the Rose (The)