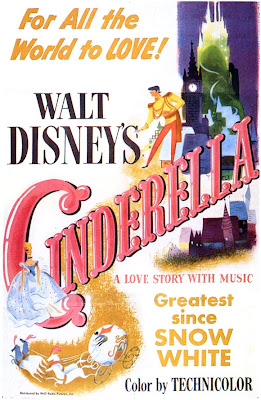 The war had crippled the Walt Disney Studio, which was now $4 million in debt. While a few of the films during the war had been financial successes, the majority of them lost money. Walt Disney needed a really big hit or the studio would close. He first started trying to adapt Cinderella in 1938, but it wasn't put into production until 1948, ten years later.

Walt Disney's Cinderella begins like most Disney fairy tales with the opening of a book. When Cinderella's father dies, she is left with her stepmother and stepsisters, who force her to be their servant. Somehow, Cinderella has remained hopeful, optimistic and kind, making friends with mice and birds. Meanwhile, the king is worried that his son won't settle down and get married before he dies, so he plans a ball and every eligible lady in the kingdom is required to attend. When Cinderella finds out about the ball, her stepmother tells her she can only go if she can get all of her work done. Of course, she and the stepsisters pile so much work on her that she has no time to make a dress, so the mice help by making one for her. But when the sisters realize that the dress is made out of parts of their clothes, they tear it up and Cinderella runs into the garden crying. In her hour of despair, Cinderella's Fairy Godmother arrives and with a few magic words, gives Cinderella a beautiful gown with glass slippers, turns a pumpkin into a coach and all of her animal friends into horses to take her to the ball. However, the spell will ware off at midnight. At the ball, the Prince dances with Cinderella and they fall in love, but at the stroke of 12, she rushes out of the palace, losing a glass slipper. To find the mystery girl the Prince danced with, the Grand Duke takes the slipper to every house to find the girl it fits. When Lady Tremaine grows suspicious that Cinderella was the girl, she locks her in the tower. It is up to the mice to get the key and get past Lucifer the cat to free Cinderella. When Cinderella comes down the stars, Lady Tremaine breaks the glass slipper so she can't try it on. But Cinderella has the other glass slipper. The film ends with Cinderella and the Prince getting married and leaving in a carriage to enjoy their happily ever after.

For the music in Cinderella, Walt Disney looked to popular song writers instead of his typical staff writers. Many songs from previous Disney films turned into big hits and in turn, they had a positive effect on the success of those films. Walt needed Cinderella to be successful, so he made sure that the songs would be popular and it worked. "A Dream Is a Wish Your Heart Makes" was a huge hit and has stood the test of time, becoming a secondary Disney anthem to "When You Wish Upon a Star." The score was nominated for an Academy Award, and "Bibbidi-Bobbidi-Boo" was nominated for best song. "The Work Song," performed by the mice, became a radio hit in addition to "A Dream Is a Wish" and "Bibbidi-Bobbidi-Boo." Of the six songs from the film, four of them are commonly featured on Disney compilation albums. In anticipation of the music being popular, Walt started the Walt Disney Publishing Company and published the songs himself, rather than going through a distributor. The soundtrack was the number 1 seller for a solid year.

The voice cast is marvelous. Ilene Woods knew the songwriters and they used her in their demo recordings to present to Walt. It was not their intention to have her cast as Cinderella, but Walt was so taken with her voice that he hired her based on those demos. Verna Felton, who voiced the Fairy Godmother, had previously voiced one of the mean elephants in Dumbo. The narrator of the film is Betty Lou Gerson, who would later voice Cruela DeVil in 101 Dalmatians. Elanor Audley voiced Lady Tremaine and would later voice Maleficent in Sleeping Beauty as well as Madam Leota in the classic Disney park attraction, The Haunted Mansion.

The animation is some of the best that Disney has ever done, even to this day. The transformation scene where Cinderella's rags turn into a beautiful ball gown was Walt Disney's favorite piece of animation that his studio had ever done. Compared to the previous package films, the film feels like it could have been made ten years later in terms of how advanced the animation is. Much of the style of the film was created by Mary Blaire. Her artistic sensibilities shine in this film. A keen eye might spot a few hidden Mickey's in the film as well. One during "Sing Sweet Nightingale" and two on Cinderella's coach at the end of the film.

Cinderella premiered on February 15, 1950, in Boston. The importance of Cinderella to the Walt Disney Company can't be understated. It was a ginormous success, the first big success since Snow White and the Seven Dwarfs. And in addition to the box office revenue, Disney made a ton of money off of merchandise and music sales. Critics were unanimous in their praise for the film. It seemed as if everybody who saw it fell in love with it. But the really important thing was that Walt Disney finally had money again so that he could make the films he wanted to make. The film enjoyed success throughout the years with numerous theatrical re-releases.

Walt Disney's Cinderella is my third favorite Disney film. The film has a lot going for it. The animation is superb, the music is wonderful, and the characters are appealing. It is impossible to not root for Cinderella to succeed. I'm a big fan of Mary Blaire and this film is full of her style, particularly in the design of the castle and the bright color scheme.

Email ThisBlogThis!Share to TwitterShare to FacebookShare to Pinterest
Labels: Cinderella