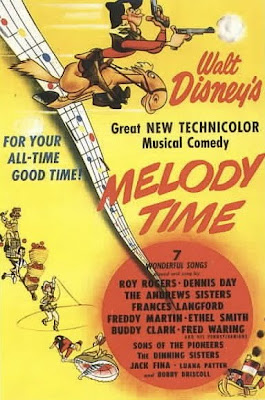 'Melody Time' was most likely put into production before 'Make Mine Music' was released. Another package feature, 'Melody Time' was Walt Disney's second attempt at a contemporary 'Fantasia.' The first missed its mark by trying to combine slapstick musical shorts with artistic pieces, causing that film to have a very erratic flow. 'Melody Time' corrects that error by sticking to the more humorous and slapstick style of musical shorts, with only one serious and artistic piece. Once again, popular music artists from the 40's lend their talent to each of the seven shorts, giving the film some star power beyond the Disney name.

The film begins with the opening of a book of sheet music as Buddy Clark sings a song called "Melody Time." The first sequence is "Once Upon a Wintertime" sung by Frances Langford. A human couple goes ice skating as a pair of bunnies mimic their actions. When the couple gets in a fight, the girl goes stomping off and doesn't realize that she has entered thin ice. The ice breaks apart and the guy must come to her rescue. Next Freddy Martin's orchestra plays "Bumble Boogie," a jazzy version of "Flight of the Bumble Bee." As the song plays, a bee flies around trying to escape plants made of musical instruments that try to get him.

In the third segment, Dennis Day sings and speaks for Johnny Appleseed and his angel in "Johnny Appleseed." Johnny feels that his job of picking apples is useless compared to the pioneers that were settling the West. His guardian angel convinces him to head West, planting apple seeds across the country for the settlers. The short ends with a gray haired Johnny heading to heaven with his angel to plant apple trees in heaven.

The fourth segment is "Little Toot," sung by The Andrews Sisters, who did a segment in 'Make Mine Music' as well. This sequence is reminiscent of "Pedro" from 'Saludos Amigos.' Little Toot is a young harbor tugboat who disrupts the bigger tugboats and causes a big ocean liner to crash. Little Toot is put out of service and banished from the harbor. While out at sea during a storm, he sees a distress signal from a big ship. He sends out an S.O.S., but the rest of the tugboats are unable to make it. It's up to Little Toot to tow the ship to safety. He is forgiven since he has learned his lesson and gained responsibility. The fifth segment is "Trees" by Fred Waring and his Pensylvanians singing the classic poem. This is the one artistic and serious sequence of the film.

"Blame It on the Samba" by Ethel Smith and the Dining Sisters is a continuation of the South American package features, 'Saludos Amigos' and 'The Three Caballeros.' It was created for the third feature, which was never produced. It features Donald Duck and Jose Carioca unenthusiastically entering the Cafe de Samba, which is run by the hilarious Arucuan. The rhythm of the samba revives their spirit. A live action lady playing is blended in with the animation, making it feel even more like an extension of Caballeros. The sequence is just as "trippy" as that film as well.

The final segment features Roy Rogers and the Sons of the Pioneers singing the story of "Pecos Bill." The singing stars are sitting around a campfire with Bobby Driscoll and Luana Patten, the stars of 'Song of the South.' Roy Rogers tells them the story of Pecos Bill and why coyotes howl at the moon as it transitions into animation. Bill was raised by coyotes and rescued a horse as a boy, who become his closest companion in all of his tall tale adventures. As an adult, he met and fell in love with Slue Foot Sue, causing a riff between him and his horse, Widowmaker. Sue wanted to be married in a big bustle and riding Widowmaker. The horse bucked her off and as she landed, her bustle sprung her higher and higher each time. Bill tried to wrangle her down, but his efforts were thwarted by Widowmaker and she bounced until she landed on the moon. Bill moved back with the coyotes and howled at the moon every night to let Sue heard him. The coyotes would join in out of sympathy and have continued to howl at the moon ever since.

'Melody Time' premiered on May 27, 1948. It did fine at the box office, but was by no means a big success. The individual segments of 'Melody Time' are well done, but the true gems are "Once Upon A Wintertime," "Johnny Appleseed," and "Pecos Bill." The animation quality is mostly comparable to the shorts, but there are a few instances of feature quality animation, particularly in "Trees." Many of the segments showcase a lot of the Mary Blaire style that I am so fond, which adds to its appeal for me. The film was never re-released in theaters, but most of the sequences were reissued individually.

'Melody Time' is currently available on DVD, but the movie has been censored. Instances of smoking have been digitally removed from "Pecos Bill" and a few scenes were fully cut from that sequence as well. Ironically, Disney didn't object to the massive amount of guns in this sequence, which was their reason for cutting "The Martins and the Coys" from 'Make Mine Music.' But the censorship won't distract you from enjoying the film and if you have never seen the short in its uncensored form, you would never know it had been altered.