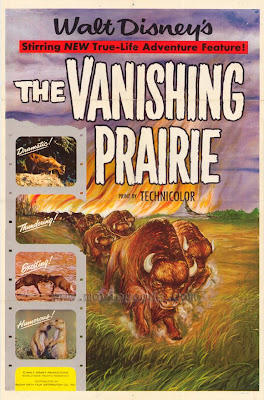 Walt Disney had been enjoying success with his series of short True-Life Adventures series since 1948. By this point, the series had already won six Academy Awards and critics and audiences couldn't get enough of this new medium that Walt Disney created, the nature documentary. For the second full length feature in the series, Walt drew attention to the prairies of Central America.

Like all of the True-Life Adventure films, The Vanishing Prairie opens with a paintbrush. The introductory animated sequence teaches about the area and how the Native Americans understood the balance that was created by the animals. The film begins with Spring as geese, ducks and other birds return to the region after spending Winter in the South. As the grass returns to the area, the buffalo begin to procreate to ensure the survival of their species. Other animals of interest are big horned sheep, mountain lions, deer, prairie dogs, burrowing owls, rattle snakes, coyotes and falcons. The film is full of humorous and suspenseful interactions between the many inhabitants of the prairie. At the film's climax, a fire starts forces many animals to flee their homes. Then heavy rains cause a flood, causing the burrowing animals to move above ground. The film ends with the arrival of winter.

The Vanishing Prairie premiered on August 16, 1954, in New York City. As usual for the True-Life Adventures, critics and audiences adored the film. Like its predecessor, The Living Desert, The Vanishing Prairie was nominated for Best Documentary at that year's Academy Awards. It won, earning Walt Disney his seventh of eight Oscars for the series.

Walt Disney's second True-Life Adventure feature is wonderful, just like the rest of the series. My family took a trip to the great plains, so the animals featured were no stranger to me, but the film was still interesting and entertaining. A remarkable fact about all of the True-Life Adventure films is that all of the audio is created by foley artists. It would have been too difficult to film and record audio for every shot. This is why music plays such a large role in these films. Once again, the only complaint that I can lodge at the film is that it uses some staged sequences, although less than The Living Desert. The most obvious stages scenes are during the fire, the flood, and in the prairie dog's tunnels.

All of the True-Life Adventures were made available on DVD in 2006 through the Walt Disney Legacy Collection. They have all been fully restored and are accompanied by great features. The Vanishing Prairie is found on volume 2. Unfortunately, the DVDs are currently out of print. It is also available on iTunes in HD.

Email ThisBlogThis!Share to TwitterShare to FacebookShare to Pinterest
Labels: Vanishing Prairie (The)