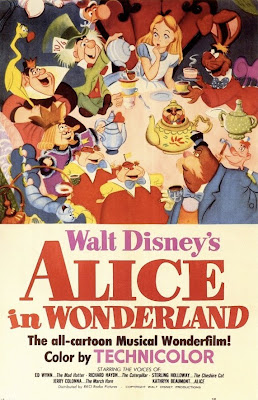 Alice in Wonderland has an interesting history at The Walt Disney Studio. The studio actually owes much of its start to Lewis Carrol's inspiration. The first series of shorts that the Disney Studio did were called Alice Comedies, which placed a live action Alice in an animated setting. They ran from 1923 to 1927 and the first in the series was called "Alice's Wonderland." And when Walt had the idea of making an animated feature film, which eventually lead to Snow White and the Seven Dwarfs, one of his first ideas was to cast Mary Pickford as a live action Alice in an all animated world. He tried that idea again with Ginger Rogers in the lead. However, over the years Walt grew reluctant about making Alice in Wonderland.

Walt's major problem was that the books lacked a linear plot. Alice goes to Wonderland, meets a lot of crazy characters, and then leaves. He also didn't find Alice to be a sympathetic character and felt that audiences wouldn't be able to relate to her. But his animation team was dying to make it. They had been begging him for years to do it and with feature animation back in full swing, he decided to let them have their chance at it.

Production on the all-animated Disney version began in 1946. When audiences thought of Alice in Wonderland, they thought of the Tenniel illustrations found in the books. So the first attempt would use those drawings as the inspiration for the art direction. The entire film was storyboard and when Walt saw it, he knew it wasn't working. They discarded that version and began storyboarding another version that would be a comedy more than anything. What the film lacked in plot they were going to make up for with gags and music. To make the film as enjoyable as possible, Walt changed thing up by taking the best characters from both books, Alice's Adventures in Wonderland and Through the Looking Glass, and combining them into a single film. The Tenniel drawings were abandoned and a more Disney character design was chosen. Ed Wynn was cast as the Mad Hatter, the first time that a famous Hollywood actor was cast as a voice in a Disney film.

To tie the film back to Lewis Carol as much as possible, most of the songs utilized poems from the books as lyrics. Over thirty songs were written, fourteen of which appear in the film, the largest number for any Disney animated feature. However, many of the songs are less than a minute long and are unmemorable. None of the songs became big hits, but a few of them are frequently found on Disney compilation albums, such as "The Unbirthday Song," "In a World of My Own," and "All in the Golden Afternoon." The score was nominated for an Academy Award, which can probably be attributed to the catchy "March of the Cards" sequence.

While the film doesn't start with the opening of a storybook, the title sequence is reminiscent of illustrations in a children's book. Alice is bored during her history lesson, but when she sees a white rabbit with a coat and watch running by, she can't help but follow him. She falls down the rabbit hole and into Wonderland, where nothing is what it seems. In her quest to find the white rabbit, Alice has many unique adventures. She grows and shrinks several times, swims in a river of her own tears, joins a caucus race to get dry, hears a story from Tweedle-Dee and Tweedle-Dum, is smoked out of a house, sings with flowers, takes advice from a caterpillar, is taunted by the Cheshire Cat, attends a mad tea party with the Mad Hatter and March Hair and gets lost in Tulgey Wood. She gets in trouble with the Queen of Hearts when she helps the cards paint white roses red and is put on trial, during which many of the characters she encountered bear witness against her. In the end, she is chased down and just as she is about to be caught... she wakes up. It was all a dream.

Alice in Wonderland premiered on July 26, 1951, in both London and New York City. Critics hated it, particularly British critics who were upset that Walt Disney had Americanized a British literary classic. Critics in the U.S. weren't kind to it either. The film was not a financial success in its initial release and just three years later, it was edited and shown on TV, the first Disney animated film to do so. However, in the 1970's the film became popular amongst college students, who would rent prints of it because of its "trippy" sequences. Similar to Fantasia, the Disney Studio noticed the trend and gave Alice in Wonderland its first theatrical re-release in 1974. The poster features bright psychedelic colors emitting from the caterpillar's pipe, which formed images of characters from the film. It did so well that it was released again 7 years later in 1981 and was one of the first Disney animated films released to VHS later that same year. Walt Disney's Alice in Wonderland had finally found an audience.

I'm a big fan of Walt Disney's Alice in Wonderland. Like many people today, the Disney version was my first introduction to the story. I have never read Lewis Carol's original novels, but I've seen countless film versions that have remained faithful to the book and I have to say that I prefer the Disney version. What it lacks in plot it makes up for with fun and appealing characters. The animation is excellent and Mary Blaire's style dominates the film, making it visually appealing. Even though this film was not successful, it was used as the inspiration for one of the first Disneyland rides, the Mad Hatter's Tea Party, which can be found at all five Disney Resorts around the world. It was my favorite ride as a kid. Disneyland added a dark ride based on the attraction in 1958. In 2010, Disney released a live action version directed by Tim Burton that became Disney's most financially successful film of all time.

Email ThisBlogThis!Share to TwitterShare to FacebookShare to Pinterest
Labels: Alice in Wonderland (Animated)