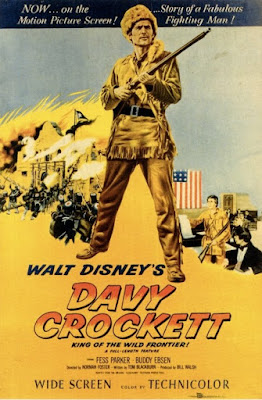 On October 27th, 1954, Walt Disney entered the new business of television programming with his weekly anthology series called Disneyland, designed to promote the world's first theme park of the same name. Each week, Walt would enter living rooms across America with stories from one of the four themed lands: Adventureland, Tomorrowland, Frontierland and Fantasyland. The series was a huge success from the beginning, but it sparked a nationwide phenomenon on December 15, 1954, when a story from Frontierland aired about the life of Davy Crockett.

Walt Disney's Davy Crockett episodes are credited with the creation of the miniseries. Three episodes aired in the first season of Disneyland, at the end of which Davy Crockett died. Walt Disney later remarked on the fact that if he had known it would have been so successful, he wouldn't have killed him off so quickly. Of course, that didn't stop Disney from producing two more episodes about Davy. The success of the episodes spawned a slew of merchandise. At one point, it seemed as if every boy in 1954 owned an officially licensed Disney coon skinned cap.

Walt Disney personally cast Fess Parker as Davy after seeing him in another film. Buddy Ebsen already had an impressive career before starring as Davy's companion George Russell. Prior to this he had done some work at Disney that few people have ever seen. Before the idea of Disneyland, Walt was working on a traveling exhibit of miniature models, one of which was an old theater with a dancing man. Buddy Ebsen provided the choreography for that model. Hans Conried, who was the voice of Captain Hook in Peter Pan, starred in one of the episodes as well.

The episodes were so successful that audiences were begging to see them again, so it made sense to package the episodes into a feature film and release it theatrically. The first film was edited from the first three episodes. Luckily, Walt Disney had the foresight to film most of his anthology episodes in color, even though TVs were only available in black and white at the time. As a result, seeing it in full color was heavily advertised. The film also advertised itself as being in widescreen, something that was accomplished through a process called "matting." Since Davy Crockett was made for TV, it was filmed in fullscreen. To make the film widescreen, theater exhibitors were instructed to use a widescreen lens, cutting off some of the image on the top and bottom of the screen. This was a new technique at the time, but is something that is still done today because it is cheaper to film in fullscreen.

As the film begins, Davy Crockett's journal opens to the famous title song, which is used to narrate story transitions. The army is looking for Davy when they find him trying to "grin down a bear." He returns to camp to see General Jackson who wants Davy to lead a scouting party to find indians. A big battle ensues, during which Davy is struck in the head with a hatchet and his friend George saves him. In Florida, the indians capture George and Davy returns the favor by saving him. While looking for a place to move his family, Davy enters a shooting competition and uses the winnings to buy his new land, but the man he won against, Big Foot, is ruining the town by forcing indians off their land and selling it to newcomers. Davy becomes to town magistrate to help fight Big Foot and forces him to stand trial. As a result, the town elects Davy to be their congressman, but Davy's celebration is soon over when he learns that his wife has died and his kids are living with his sister. In congress, Davy meets with General Jackson, who is now president. Since Davy is one of the few pro-indian congressman, he is sent on a speaking tour as a distraction from a bill that is being passed to take back the land rights that were granted to them, but George gets Davy back to Washington in time to fight the bill. After leaving congress, Davy heads to Texas to help fight at the Alamo. A huge battle ensues against the Mexicans as George goes on a mission to get help, but nobody will come. During the final battle, George is shot and killed. The film ends with Davy as the last man fighting. His death isn't shown, but the closing song lets us know that it was his last battle.

Davy Crockett: King of the Wild Frontier premiered on May 25th, 1955, just six months after the first episode debuted on TV. The success of the episodes translated to the screen and it grossed more than $1 million. Not bad for a film that audiences had already practically seen for free at home.

While watching Davy Crockett: King of the Wild Frontier, it's very easy to see why it was such a huge success. It's quick paced and full of action, with a lot of sentiment thrown in. If the film has one fault, it's the speed in which the story is told. The three episodes from which it was edited had a total run time of 150 minutes, only 93 of which made it into the film. The original episodes contained pauses to highlight the dramatic effect of what was happening, but those instances were cut from the film, which is a shame. The film is an enjoyable experience, but the best way to watch Disney's Davy Crockett is in its original episodic form.

Walt Disney's Davy Crockett: King of the Wild Frontier is currently available on DVD paired with its sequel, Davy Crockett and the River Pirates. Both films are presented in fullscreen, the way they were filmed, but not their original theatrical aspect ratio. All five original, uncut Disneyland episodes were released to DVD in 2001 as part of the Walt Disney Treasures collection. That 2-disc set was limited to 150,000 copies and has become heavily sought after by collectors. It is also available on iTunes in fullscreen, where it is available in HD.

Email ThisBlogThis!Share to TwitterShare to FacebookShare to Pinterest
Labels: Davy Crockett: King of the Wild Frontier