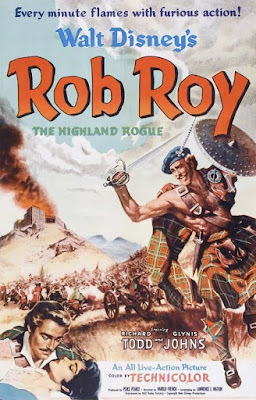 Walt Disney's Rob Roy: The Highland Rogue was the fourth and final film made with the money Disney had made in the U.K. during the war which couldn't be exported. Richard Todd had starred in two of those films (The Story of Robin Hood and The Sword and the Rose). Glynis Johns played his love interest in the previous one and James Robertson Justice returns for his second Disney British film as well. In addition to the cast, much of the production crew were the same as the previous films, including producer Perce Pearce and matte artist Peter Ellenshaw. However, Ken Annakin was unable to return as director due to a contract dispute with another studio and Harold French took control of this film, the only one he did for Disney.

Robert Roy MacGregor was a real person who lived in the late 17th and early 18th centuries. In real life, he defaulted on a loan when his cattle were stolen. His family was forced out of their homes and he waged a war against his creditors, eventually winning. Fictionalized tales about Rob Roy were written during his lifetime, characterizing him as a Scottish Robin Hood who lead a fight against King George. Sir Walter Scott later wrote a novel called Rob Roy based on those tales. When Ken Annakin was in charge of the film, it was going to be based on Scott's novel. When Harold French took over, he changed it to be closer tied to the original tales and real history.

The film takes place in the early 18th century. The Scottish have been revolting against England's German King George for his heavy taxation policy, but most of the uprisings were crushed by the English army and eventually, only a few rebels were left. Rob Roy emerges as the leader of the rebels and is captured and taken to England to be hung. Rob's mother urges the Duke to send Rob to London for his trial with a plan for the rebels to free him during the journey. After his rescue, he marries Helen Mary and King George gives amnesty to all of the rebels, except for Rob Roy and his family. They arrest Rob, but on the journey back to London he escapes again. They steal his cattle and set his home on fire, which kills his mother. A London publication centered around Rob Roy is started and he becomes a hero amongst the people. Rob Roy travels to London to ask the King for amnesty for his men if he gives himself in. Instead, the King pardons Rob Roy.

Rob Roy had its first public screening on October 26, 1953, as a Royal Command Film Performance in the U.K. However, the film didn't have its official premier until February 3, 1954, in New York City. Critics received it warmly, praising the film for its faithfulness to the tales. However, the complex plot confused audiences and the slow pace bored them. It was not a commercial success. It was the final Disney film released by RKO. Disney had already created the Buena Vista Distribution Company by the time this film was finished, but a distribution agreement with RKO was already in place before its existence.

Rob Roy: The Highland Rogue had all of the necessary ingredients to be a great film, but it somehow fails to do so. To be fair, it has quite a few redeeming qualities. The acting is top notch and the sets and costumes are exquisite. The source material is intriguing as well. Where the film falls flat is the pacing. The film is plagued by frequent slow spots that become boring. It suffers from lengthy scenes of straight dialogue with little going on. In addition, the characters go through so much pain and have to fight so hard that the payoff feels small in comparison. The resolution is also handled so quickly that it feels rushed. It's definitely not a satisfying ending. Had Ken Annakin been able to stay on as director, it probably would have been as good as the other British Disney films. I wouldn't say it is bad, but it's not particularly good either.

Rob Roy: The Highland Rogue is currently available on DVD as a Disney Movie Club Exclusive. It is also available on iTunes.