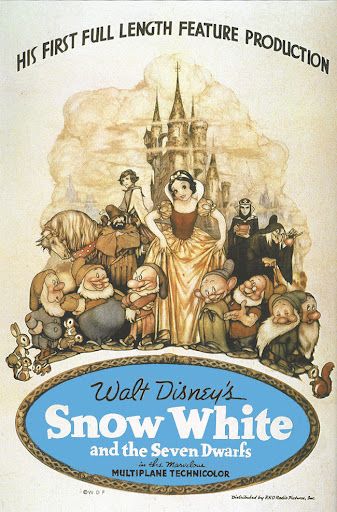 There are a multitude of expressions that are commonly used to describe Walt Disney's Snow White and the Seven Dwarfs, but my personal favorite, and the most fitting for this post, is "The one that started it all." As a child, I was very aware of the existence of this film and its importance to the company through Sing-Along-Songs videos and the attraction at Walt Disney World, yet I didn't get to see it until I was eight, when it made it's final theatrical release in 1993. I loved every minute of it and you can imagine my excitement when it finally came to VHS a few months later. Flash forward sixteen years to 2009. The film has had its third home video release and is now available on a new medium, Blu-Ray. It is this most recent Diamond Edition Blu-Ray that I am watching for this review.

The film opens with a message from Walt Disney expressing his gratitude and appreciation to his staff, which is fitting because this film had all of the odds against it, yet Walt's loyal team followed his vision and the end result changed the way movies were made forever. The press called it "Walt's folly," claiming that audiences would never sit through 90 minutes of animation. They made outlandish claims, such as the bright colors would hurt your eyes after more than ten minutes. It is for this reason that Snow White uses a softer color palette than most of Disney's animated features. Thankfully all of the naysayers were proven wrong when the film premiered on December 21st, 1937. It was both a critical and a financial success. The film won a special achievement Oscar, and a rather unique one at that: one regular sized Oscar and seven little ones. And with the revenue from Snow White, Walt was able to build a bigger and better studio in Burbank, which is the current corporate headquarters for The Walt Disney Company. Walt Disney was famous for saying "It all started with a mouse," but the company wouldn't be anything close to what it is today had it not been for this film.

In case you have somehow managed to never see this film or hear the classic fairytale, it's about Snow White, a princess who has been forced into servitude by her stepmother, the evil Queen. Every day, the Queen asks her magic mirror to tell her who is the fairest in the land. One day, the mirror answers the Queen's request with the words "Snow White," and because of the Queen's insane jealousy, she orders the huntsman to kill Snow White. Unable to do it, he sends Snow White into the forest, where she meets and lives with seven dwarfs. But when the Queen's mirror continues to tell her that Snow White is the fairest in the land, she takes matters into her own hands by disguising herself as an old peddler woman and giving the princess a poisoned apple. However, the apple has one major stipulation: the poisoned party can be reawakened by love's first kiss. And so when the Prince happens upon Snow White's glass coffin and is compelled to kiss her, she awakens, climbs on his horse, and they ride off into the sunset to enjoy the first of many happily ever afters in Disney films.

The storybook opening prepares us for the world of fantasy that is about to open up to us. Part of what Snow White does so well is move the story along in such a way that doesn't feel rushed, but never gets slow either. That's a pretty big accomplishment for any film, but it's even more impressive when you consider the fact that it is more than seventy years old. Another key factor to the success and timelessness of the film is its cast of appealing characters. Snow White is incredibly likable and appealing. You genuinely care for her and want her to succeed. The seven dwarfs provide one of the best supporting cast in any film. Perhaps the greatest addition that Walt Disney made to the original tale by the Grimm brothers was giving each dwarf a name and personality. Two of them, Dopey and Grumpy, are still frequently used in Disney merchandise and apparel. The Evil Queen, in both her elegant and her haggard form, is one of the most famous villains from all of film history because she is so iconic and fascinating. And while the Prince doesn't get much screen time, he exudes charm and it is easy to understand why Snow White is in love with him.

Part of the reason that Snow White was such a big success is the music. It was the first time that music was written for a film that moved the plot along. Prior to Snow White, songs in films were simply for entertainment and usually stopped the story. In Snow White, the songs continue to move the story along. And on top of that, they are incredibly memorable. Two of the songs, "Heigh-Ho" and "Some Day My Prince Will Come" are among Disney's most widely known songs. And one of my personal favorite Disney songs comes from this film, a love ballad sung by the Prince called "One Song." The music was so well received by the public that Snow White had another "first" beyond being America's first feature length animated film. It was also the first film to have an actual "soundtrack" release. Prior to this, records were released of songs from films, but they were re-recorded. This was the first time that people could buy an album of the songs as heard in the film.

The quality of the animation is excellent by today's standards. I can only imagine how jaw dropping it must have been to see this in 1937. While many animation studios, including Disney, had attempted realistic human characters before, none were able to pull it off. But Disney managed to get it right in their first feature film, and lucky for them. The film probably wouldn't have stood the test of time so well had the human characters not been convincing. The high definition restoration makes it easy to see some of the animation flaws, most of which happened during the photography of the cells, but it takes a keen eye to notice them and they are minor.

There are volumes that can be written, and have been written, about Walt Disney's Snow White and the Seven Dwarfs. If there are ten Disney films that should be in everyone's collection, this is without a doubt one of them. Not just because of the crucial role it has played in the history of the company, but because it is a fantastic film in its own right. There have been some amazing and memorable Disney films made since, both animated and live action, but this film really holds its place alongside of them. I honestly can't shower this film with enough praise. If you are a Disney fan who is reading this blog who doesn't own it, I suggest you make a point of getting it soon. Disney doesn't usually keep it available for long and they wait 7 years between releases.

Snow White and the Seven Dwarfs was released on Diamond Edition Blu-Ray and DVD in 2010 and is now out of print. The Diamond Edition Blu-Ray treats the film the way it deserves to be treated. The most impressive bonus feature is called 'Hyperion Studios,' named after the studio that Walt Disney owned and the place where 'Snow White' was made. This is a comprehensive and interactive feature that basically gives you some Disney history and insight into the production of the film. I did everything and it took me over four hours to get through this one feature. There is a unique feature called 'Snow White Returns' about storyboards that were recently discovered for a follow-up short cartoon that was never produced. And in addition, many features from the 2001 Platinum Edition DVD have been ported over. The restoration is immaculate. This is the first home video release that has presented the film with the original colors. Before this, restoration technology was only capable of getting close, not exact. Snow White is expected to remain out of print until 2017.

Email ThisBlogThis!Share to TwitterShare to FacebookShare to Pinterest
Labels: Snow White and the Seven Dwarfs