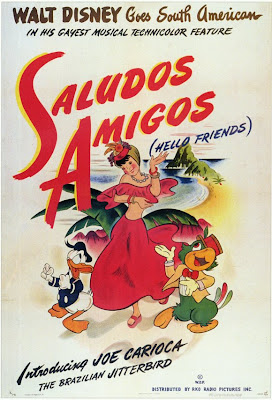 In 1941, the U.S. government asked Walt Disney to go on a good will tour of South America in hopes that the countries there would become our allies in World War II. Up until that time, most of the good will tours had been disastrous, with the parties often offending the culture of the Latin American countries they visited. However, the Disney tour was a huge success, in part because Walt and the artists tried to take in the local flavor of each country and also because Disney characters were huge stars there. Part of the agreement was that Walt would take a team of artists along with him and they would produce twelve short films inspired by the trip.

The first batch of four shorts were completed in 1942, but instead of releasing them as shorts, Walt decided that they were more marketable as a feature film, so he packaged the four shorts together into a feature film called Saludos Amigos. The shorts are linked with live action footage that was taken during the trip. However, some of the footage that you see in the film was "faked" when they decided to make a feature film. For example, shots of the artists boarding the plane were filmed in Burbank, as were a few closeup shots of the artists sketching their inspirational live action subjects. At just 42 minutes long, it is one of the shortest feature films ever released by the studio.

The film opens with the Disney team, aka 'El Grupo', boarding their flight. They arrive in Lake Titicaca, with live action footage of the region which transitions into an animated segment in which Donald Duck visits that area of Peru and Bolivia. Next live action footage follows the team to Chile, where the film transitions to the second short, 'Pedro', about a little plane who must deliver mail over the menacing Aconcagua mountain. The next transition takes us to Argentina, land of the gauchos. Here cowboy Goofy flies South to demonstrate the difference between a cowboy and a gaucho. Finally, we head to Brazil. After a paintbrush paints lots of flora and fauna in watercolor, Donald Duck meets Joe Carioca, a Brazilian parrot who shows him around Brazil and teaches him the samba.

Saludos Amigos had it's world premier on August 24, 1942, in Rio de Janeiro, but it didn't have it's U.S. premier until February 6, 1943. It was a huge success in South America and the U.S., and as the war came to a close, it was released in parts of Europe in 1944. The film was nominated for three Academy Awards for best sound, best score and best song for the title song, 'Saludos Amigos,' the only song written for the film. All of the other songs were popular South American songs, two of which became hits in the U.S. after the film was released, 'Aquarela do Brasil' (retitled 'Brazil' in the U.S.) and 'Tico Tico.' The film was so warmly received that the government changed the plan for 12 shorts and instead wanted two additional feature films, only one of which would be completed, The Three Caballeros.

As a child, I knew of the existence of Saludos Amigos because it was on the list of Disney animated classics, but I had little access to it. I had seen some of the shorts outside of the feature, but never the film in its entirety. It wasn't available on VHS and whenever it played on The Disney Channel, it was past my bedtime. I first got to see it in 2000 when it made its DVD debut. It is a wonderful film and it is easy to see why it was so successful. It's sad that time has sort of forgotten this film, but a group of devoted Disney fans have kept it's memory alive.

Recently, a film documentary was made called Walt & El Grupo which chronicles the trip to South America that Disney took with his artists. In addition, a book was recently published called South of the Border with Disney which chronicles the trip and all of the films that resulted from it. It provides much insight into the making of Saludos Amigos. The film is currently available on Disney DVD as part of the Classic Caballeros Collection, which packages it with The Three Caballeros. It should be noted that the film is censored on DVD. A shot of Goofy with a cigar in his hand has been edited to remove the cigar. It is also available on iTunes in HD.