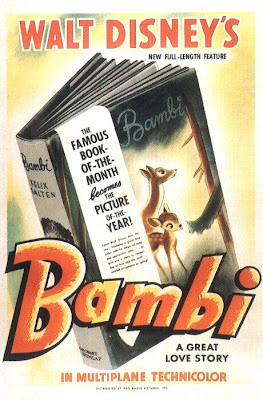 By 1942, the US had entered World War II and the majority of Walt Disney's studio was at work on war related productions, with the exception of Bambi. Walt Disney was in debt because Pinocchio and Fantasia didn't make money, so Walt had to sell bankers on the idea of putting money into Bambi. Luckily, the bankers saw the potential for the film and agreed to finance it. Production on Bambi was also plagued by an animators strike that deeply hurt Walt and changed the family atmosphere that had been established during the early years at the studio.

Based on a book by Felix Salten, Bambi was in production for six years. The story went through multiple rewrites until it was stripped down to the bare essentials. Animators studied real animals for years to be able to animate them in a much more realistic way than was typical at the time. The film tells the story of life.

The film opens with the birth of Bambi and follows him as he learns to walk and makes friends with Thumper the rabbit and Flower the skunk. Adorable sequences find the curious young deer learning about nature as he experiences his first rain storm and first winter. Bambi's life changes dramatically when his mother is killed by a hunter. As he grows up, he learns about love and finds his mate, Faline. Another buck fights Bambi for Faline as a raging fire sweeps through the Forrest. At the end of the movie, Bambi takes his father's place as prince of the forest.

There are less than 1,000 words spoken in the film. The bulk of the story is told through watching the character's actions. As a result, the music in the film is very important, perhaps more important than in other Disney films. The score was nominated for an Academy Award and "Love is a Song" was nominated for best song, but neither won. Another song from the film, "Little April Shower," has become a Disney classic, often found on compilation albums. Most of the songs are sung by a choir instead of characters, making Bambi the first Disney film to use songs more as a narrative rather than a way for characters to express their feelings or desires.

Bambi was released on August 13, 1942. Because of the war, it was not able to be released overseas, so much of its potential revenue was no longer possible. And because of the high production cost, Bambi did not make money during its initial release. However, five years later it was rereleased in 1947 and finally made money for Disney. In total, Bambi had 7 theatrical releases in the U.S. which have allowed it to become a classic over time.

'Bambi' was released on Diamond Edition Blu-Ray in 2011 and as a 2-disc DVD set. The film has been fully restored and includes many great bonus features, including a making-of featurette, deleted scenes, and a peak inside Walt's story meetings. Although out-of-print, both are still easy to find.

Email ThisBlogThis!Share to TwitterShare to FacebookShare to Pinterest
Labels: Bambi