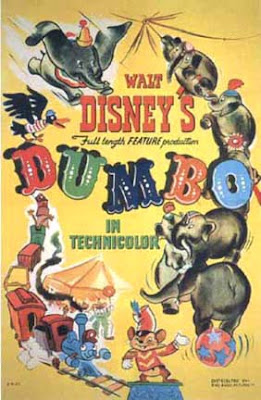 After losing money on Pinocchio and Fantasia, Walt Disney was forced to make his next animated feature on a tight budget. Dumbo cost less than a million dollars to make, a fraction of the cost of the previous three animated features. Background and character design were kept simple to save time, and as a result the animators were able to focus more on the acting. Dumbo is generally accepted to have some of the best acting in any animated film.

Dumbo is about a young elephant with big ears. He is shunned by all of the other animals and becomes a running joke in the circus. When his mother is locked up for protecting him from a group of rowdy kids, Dumbo is befriended by Timothy the mouse, who takes Dumbo to visit his mother. On the way back, Dumbo gets hiccups and Timothy finds him a pail of water, not knowing that some clowns had emptied alcohol into it. Dumbo and Timothy hallucinate about pink elephants and wake up high in a tree. Timothy puts two and two together and realizes that Dumbo must have flown them up with his big ears. Dumbo takes off in flight during a humiliating circus performance and steals the show, becoming a big star. As a result, his mother is freed and the two are happily reunited again.

At 64-minutes in length, Dumbo is one of Disney's shortest feature films. It is reported that distributor RKO requested that Walt either make it longer if they were to distribute it as a feature, or cut some material out so they could release it as a short. Walt refused to do either. This is definitely for the best, because Dumbo is the perfect length. It has no dull areas where audiences lose interest, but if it were longer it probably would. One of Walt's greatest strengths as a filmmaker was a good since of timing and trimming off what shouldn't be included.

The film has been the source of some controversy over the representation of black people because of the crows that help Dumbo realize he can fly. All of them are voiced by African Americans, except for the lead crow who was voiced by Cliff Edwards, the voice of Jiminy Cricket. In addition, the lead crow is named Jim Crow, which is also the name of the laws that kept black people segregated from white people. However, aside from Dumbo's mother and Timothy mouse, the crows are the only other characters in the film who sympathize with him. Their song "When I See an Elephant Fly" is seen by some as taunting Dumbo, but it's actually meant as a jab at Timothy for suggesting such a ridiculous thing as an elephant flying. At any rate, the controversy goes over most people's heads and isn't seen as a big issue.

Dumbo premiered on October 23rd, 1941, and was a success, the first Disney film to make money after Snow White and the Seven Dwarfs. Had Dumbo not been successful, it's hard to say how much longer the studio would have been around. The score won an Academy Award and one of the songs, "Baby Mine," was nominated for best song. Many modern animators claim Dumbo as their favorite film, including John Lasseter. In addition, "Pink Elephants On Parade" is heralded as one of the best animated sequences in the history of the medium.

This film was an important part of my childhood. It is possibly the first Disney film I ever saw, due to the fact that it was readily available on VHS and was frequently played on TV. In addition, I regularly watched a TV series for preschoolers based on it called Dumbo's Circus. No visit to Walt Disney World was complete for me without a ride on Dumbo the Flying Elephant, an attraction that can be found at every Magic Kingdom style park around the world. A large plush of Dumbo was among my favorite toys as a kid.

Dumbo is currently available on Blu-Ray and DVD where it has been beautifully restored and is presented in its original fullscreen theatrical aspect ratio. Bonus features on the Blu-Ray include a video commentary, "Taking Flight: The Making of Dumbo" documentary, deleted scenes, a featurette about the legacy of the film, a short piece about the Disneyland attractions based on the film, the original theatrical trailer, art galleries and bonus shorts ("Elmer Elephant" and "The Flying Mouse"). It is also available on iTunes in HD, but it doesn't come with any bonus features.

Email ThisBlogThis!Share to TwitterShare to FacebookShare to Pinterest
Labels: Dumbo