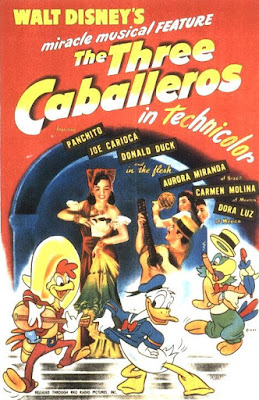 When the CIAA originally sent Walt Disney and a team of artists to South America on a good neighbor tour, they had placed an order for 12 short films based on their travels. Instead, Walt delivered the first 4 packaged as a feature called Saludos Amigos, which was so successful that the CIAA changed their order from 12 shorts to 3 package features. The Three Caballeros was the second film in the series, although the final film never materialized the way it had been conceived. The rest of the contract was finished through a few short films and segments in later package features.

Caballeros is similar to Saludos Amigos in many ways, the most obvious being the carry over of Jose (Joe) Carioca and the recurring theme of Donald Duck and South America. But the two films are similar and dissimilar in structure as well. Like Saludos Amigos, Caballeros is primarily made up of 4 shorts ('The Cold Blooded Penguin,' 'The Flying Gauchito,' 'Baia,' and 'La Pinata'), however 'La Pinata' is much longer than a traditional animated short, with a run time that accounts for almost half of the picture. This film also uses a lot of "combination scenes," blending live action with animation. Walt was so fascinated with the new process used that he would later use the technique in many of his films, including Song of the South and Mary Poppins. Unlike the previous film, Caballeros uses animated interstitial sequences instead of live action travel footage.

The first image seen after the opening credits is a giant package from South America sent to Donald Duck for his birthday (Friday the 13th). Inside the package are three presents. The first is a projector, screen, and a film reel. Donald sets it up to watch a program about strange birds. First is a story about Pablo, a penguin who moves to the Galapagos Islands to escape the cold (This sequence contains what may be the first hidden Mickey in the form of a sand bucket with Mickey and Pluto's silhouettes on it). Donald's gift continues with a montage of strange South American birds, the most memorable of which is the Arucuan, who has a song that is sure to make every viewer chuckle. Next is the tale of a young gaucho ("gauchito") who finds a flying donkey and competes with him in races. The next gift Donald opens is a book from Brazil. Jose Carioca pops out and sucks Donald in as they visit Bahia (spelled Baia in the 1940's). The Arucuan interrupts their journey a few times, much to my delight. Once in Bahia, Donald and Jose meet Ya Ya (Aurora Miranda), a live action lady who steals their hearts. Donald and Jose open the third present which is a pinata that comes with Panchito, a rooster from Mexico, who declares them the three caballeros. Panchito teaches Donald and Jose about La Posada, a Mexican Christmas tradition. After Donald breaks the pinata, they board a magic carpet that takes them through live action scenes of Mexico. Donald's girl crazy antics continue as he dances with some girls and chases after more at Acapulco Beach (the beach was actually just sand on the Disney Studio parking lot). As Donald is shown Mexico City at night, all he can see is a beautiful woman (Dora Luz) singing to him as he goes delirious with girl fever. Eventually Carmen Molina appears dancing with flowers and then cacti. Donald then enters a fake bull and has a bullfight with Panchito that results in a fireworks finale.

The Three Caballeros premiered on December 21, 1944, in Mexico City. It was very successful in South America, but met a mixed reaction in the U.S. Critics were generally split, half showering the film with praise and the rest complaining that it was too zany and inconsistent with no real substance. However, critics were unanimous that the live action/animation combination scenes were the best they had ever seen. Financially it evened out, but the film cost considerably more than Saludos Amigos. Many of the songs featured in the film became radio hits shortly after, but since none of the songs were written for the film (including the title song), they weren't eligible for Academy Award nominations. However, both the score and sound were nominated.

The Three Caballeros could have faded into obscurity and been forgotten, but in the 1970's, college students began renting prints of it after hearing about its "psychedelic" sequences. Disney noticed the trend and gave the film a theatrical re-releases in 1977. It was one of the first Disney animated films released to VHS in 1982 and has since received multiple releases on VHS, laser disc, and DVD. While the film has never achieved true classic status, it is fondly remembered by those who have seen it and its more recent popularity has helped spread awareness of its predecessor, Saludos Amigos. Guests visiting Walt Disney World and Tokyo Disneyland can occasionally find Panchito, Joe Carioca, and Donald Duck together for photos. And the attraction at the Mexico pavilion in Epcot was enhanced in 2007 and now includes Panchito and Jose searching for Donald in Mexico.

I thoroughly enjoy The Three Caballeros. The flying donkey has to be one of the most adorable animated characters ever created. Part of the appeal for me is Mary Blaire, who was Walt Disney's favorite artist. I'm a big fan of her work and her style is particularly present in this film. She created many of the backgrounds in the "Baia" sequence and the La Posada portion of "La Pinata" is 100% Mary Blaire. While some of the animation in the film resembles that of the shorts, there are some fine examples of great animation in the film. The animation for the title song is considered one of the best sequences in animation history. Many of the zany jokes were created by animator Ward Kimball without the aid of a storyboard. And Donald's delirium at the end is a feast for the eyes.

A film was recently released to theaters called Walt & El Grupo which chronicles the Disney South American good neighbor tour. Disney Editions also released a great book called South of the Border with Disney by J.B. Kaufman that gives more insight into the tour and all of the films that resulted from it, with a large portion devoted to The Three Caballeros. The film is currently available on DVD as part of the Classic Caballeros Collection where it is appropriately packaged with Saludos Amigos.

Email ThisBlogThis!Share to TwitterShare to FacebookShare to Pinterest
Labels: Three Caballeros (The)