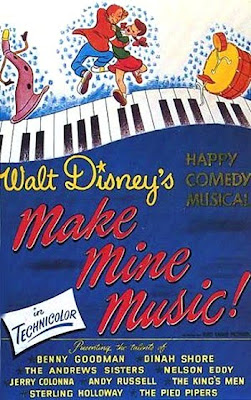 When Make Mine Music was put into production, the world was still at war and the government had control over most of the Disney Studio, leaving Walt with few resources to continue making feature films. As a result, the studio was forced to switch to making "package features," which strung short subjects with a unifying theme into a feature length film. Make Mine Music was the third package feature.

The best way to describe Make Mine Music is to call it Fantasia with modern music by 1940's standards. Fantasia set animation to classical music, Make Mine Music is mostly set to pop tunes performed by some of the era's most famous artists. Ironically, one of the sequences called "Blue Bayou" is a cut sequence from Fantasia that was originally set to "Claire de Lune." They simply changed the song. The film consists of 10 sequences.

As the title cards play, a song called "Make Mine Music" sets the tone for the whole film. As the cards progress the theater doors open and our program for the night's entertainment unfolds.

The first sequence is "The Martins and the Coys." The Kings Men sing this folk song about two country families who live by their guns. War ensues when Grandpa Coy is caught stealing eggs from the Martin's hen house. The majority of both families comically dies, leaving 1 Martin and 1 Coy to carry out the fight. However, the surviving Martin is a pretty girl and the surviving Coy is a handsome man. Naturally, the two fall in love and get married, carrying out the feud as the couples quarrel for the rest of their life.

Next is an extremely different sequence called "Blue Bayou" sung by The Ken Darby Chorus. As the pretty ballad plays, we see a lush bayou through impressive multiplane shots. A crane enters the bayou and flies around until finding a mate. The two birds fly together as the sequence comes to a close.

A much more hip number called "All the Cats Join In" follows performed by Benny Goodman and his orchestra. A pencil draws the characters as they come to life. The sequence centers around teens as they head to the malt shop dance to juke box music. The term "cats" in the title refers to the term given to cool kids in the 1940's.

"Without You" performed by Andy Russell reveals a rainy window scene that transgresses into surreal imagery. The visuals in this sequence feel like they could have been from 'Fantasia' if the music was changed to a classical piece.

"Casey at the Bat" is performed by Jerry Colonna in a mix of poetry and song. It's a famous story about a cocky turn of the century baseball star who took two strikes thinking he didn't need them, but then he missed the ball, losing the game and ruining his reputation.

"Two Silhouettes" is a ballad sung by Dinah Shore. This sequence takes the silhouettes of two live action dancers and sets them against an animated backdrop.

Familiar Disney voice Sterling Halloway (Dumbo, Bambi, The Three Caballeros) tells the story of "Peter and the Wolf" set to music by Sergei Prokofeiv. It tells the story of little Peter who goes out to hunt the wolf with his toy gun. Peter's animal friends join in the hunt and almost risk their lives in doing so, but the Disney happy ending differs from the original Russian tale in that none of Peter's friends are actually eaten by the wolf.

"After You've Gone" by Benny Goodman and his orchestra is a jazzy number that involves anthropomorphized musical instruments dancing. The sequence is quite trippy.

The Andrews Sisters perform the tale of "Johnny Fedora and Alice Bluebonnet." A fedora and a bluebonnet fall in love in the window of a department store, but the two are separated as they are purchased by different people. The two search for each other from the top of their owners' heads with little luck. Johnny eventually becomes a horses hat, but serendipitously Alice has received the same fate and they ride together atop hose heads and live happily ever after.

The final sequence has Nelson Eddy performing all of the voices for "The Whale Who Wanted to Sing at the Met." It tells the tale of an operatic whale and an impresario who is convinced that the whale has swallowed an opera singer. So he goes out in search of Willie the whale, only to discover that the whale hasn't swallowed an opera singer, but can really sing. Willie imagines the impresario taking him to the Met and making him a worldwide sensation. However, in the middle of Willie's dreaming, he is harpooned by the impresario, never to live his dream of singing at the Met. The stories grim ending has the morale lesson of the fact that people tend to not believe in miracles. The film ends with Willie as an angel singing his big heart out. As the camera pans by the pearly gates, there is a "sold out" sign.

Critics and audiences were unkind to Make Mine Music. They considered it the first post-war feature by the studio. As a result, they expected a grand return to the style of the earlier animated features. The criticism that I agree with is that the film never fully decides what it wants to be. It has some rather funny and entertaining segments ('The Martins and the Coys,' 'All the Cats Join In,' 'Casey at the Bat,' 'Johnny Fedora and Alice Bluebonnet,' 'The Whale Who Wanted to Sing at the Met') that really stand out. But they are mixed with segments that try too hard to be classical and artistic ('Blue Bayou,' 'Without You,' 'Two Silhouettes'). The mix of incompatible sequences is the film's demise. Some also saw putting "Peter and the Wolf" to animation as sacrilegious because the piece was meant to inspire childrens imaginations. However, Sergei Prokofeiv has sad that he originally composed the piece in hopes that Walt Disney would set it to animation.

Make Mine Music was never re-released theatrically, but many of its sequences were later released as shorts or shown on TV. As a kid, I was shown "Peter and the Wolf" in elementary music class and had seen "Casey at the Bat," "Johnny Fedora and Alice Bluebonnet," and "The Whale Who Wanted to Sing at the Met" on The Disney Channel. The film has a presence at Disneyland, where the most popular restaurant is named "Blue Bayou," and at the Magic Kingdom in Walt Disney World, the hot dog stand on Main Street is called "Casey's Corner" after "Casey at the Bat."

Make Mine Music was released on DVD and VHS for the first time in 2000. Disney censored the movie by removing "The Martins and the Coys" for fear that modern audiences would find the guns offensive. However, nobody is ever shot on screen and it was all handled in a comical manner. In addition, guns are used in "Peter and the Wolf" and "Johnny Fedora and Alice Bluebonnet" and those sequences were not edited. I would say that "Casey at the Bat" has more violence than this sequence. With the sequence in tact, the film would still probably pass for a G rating and definitely no higher than PG. Modern Disney animated films have used guns in much more menacing ways. The film is currently available on DVD. Hopefully Disney will release the uncensored film someday with a restoration. The current transfer is plagued by white specks and excess grain.

Email ThisBlogThis!Share to TwitterShare to FacebookShare to Pinterest
Labels: Make Mine Music