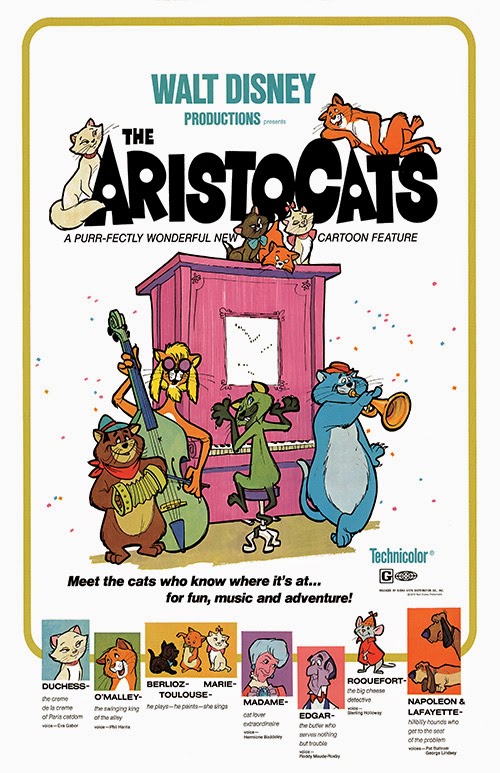 Although well established as a live-action film studio by 1970, animation had always been, and would continue to be, the hallmark of Walt Disney Productions. Walt Disney passed away at the end of 1966, a year before his final animated masterpiece, The Jungle Book. But before he passed, he had already greenlit the next animated film... The Aristocats.

The origin of The Aristocats dates back to a decade prior when Mr. Ed was groundbreaking TV. Walt tasked producer Harry Tytle with finding an animal story that would make a good two-part movie for The Wonderful World of Color. Tytle and director Tom McGowan brainstormed and drew inspiration from a story about a mother cat and her kittens lost in New York City paired with the success of One Hundred and One Dalmatians and conceived of a similar story set in Paris. The original treatment featured a butler and a maid as villains and while hiding from them on the streets of Paris, the mother cat would hide each kitten in a foster home that could nurture their talents. McGowan hired Tom Rowe to write the script, paying for it out of his own pocket. However, the story got shelved at the studio and Tytle proposed that they retool it as an animated feature in 1963. Walt loved the idea, but story development kept getting sidetracked by other projects (World's Fair, Mary Poppins, The Jungle Book) until the story men were left to deal with it without Walt's supervision.

The end result of The Aristocats would be a team of artists who spent their careers up until then under a leader who always had final say. They were thirsty to prove themselves, so many changes were made to the film that ultimately wound up on screen. Woolie Reitherman took sole directorial duties again, having directed both The Sword in the Stone and The Jungle Book. The casting team hired mostly Disney regulars. Phil Harris (Balloo in The Jungle Book) returned for his second of three animated films at Disney to play Thomas O'Malley. Eva Gabor makes her first Disney appearance as Duchess (she would go on to voice Bianca in both The Rescuers and its sequel). Other recognizable Disney voices include Sterling Holloway (Winnie the Pooh), Paul Winchell (Tigger) and Thurl Ravenscroft (singing bust in The Haunted Mansion). This was the last Disney film for Hermoine Baddeley who voiced Madame and played the maid in Mary Poppins. It was the final film for Bill Thompson who plays Uncle Waldo and passed away in 1971. His memorable Disney voice work includes Smee in Peter Pan, Jock in Lady and the Tramp and the White Rabbit in Alice in Wonderland. Outside of Disney, he was most famous for being the voice of Snoopy.

Because the music was in development at the same time as The Jungle Book, it shares many of the same songwriters. Terry Gilkyson, who wrote the Oscar nominated "The Bear Necessities," wrote "Thomas O'Malley Cat." The Sherman Brothers wrote a complete score of songs for the film as well, but only three would wind up in the final film: "The Aristocats," "Scales and Arpeggios" and "She Never Felt Alone." After Walt passed, the executive committee that approved all studio decisions edged the Sherman's out and they left in 1968 to pursue freelance careers. When the story team decided to introduce a jazz band of cats to the story, they called upon jazz writer Al Rinker and a new studio songwriter, Floyd Huddlestone, to write "Ev'rybody Wants to Be a Cat." The character of Scat Cat was based on Louis Armstrong, who was meant to voice the character. However, he was too sick to do the role by this time and Scatman Crothers was hired. While a famous jazz singer in his own right, Crothers was instructed to do his best Armstrong impression.

The film's opening credits features line art of the characters from various scenes over brightly colored textured backgrounds as the song "The Aristocats" plays. While Madame is making her will, her butler Edgar overhears that all of her wealth is willed to her cats first, then to her butler. Duchess and her three kittens (Berlioze, Toulouse and Marie) live in a grand mansion in Paris and spend their time practicing the arts. Edgar drugs the cats and takes them away at night on his motorbike with plans to drown them in the river. However, two farm dogs charge the bike and he loses the kittens in a ditch in his attempt to escape. Duchess and her kittens are unable to fend for themselves, but find help in an alley cat named Thomas O'Malley, a loner who cant resist Duchess' charm. On their journey, they meet a gaggle of catty geese and a jazz band of alley cats. Meanwhile, Edgar realizes he left evidence at the crime scene and returns to clean it up. The dogs cause him more trouble and he arrives back at the mansion at the same time as the kittens. The alley cats help them trap Edgar in a shipping container bound for Timbuktu. Madame adopts Thomas O'Malley and uses her money to start a home for alley cats.


The Aristocats had its world premier in L.A. on December 11th and was released to theaters on December 24th, 1970. It was not critically acclaimed and most reviewers agreed that it was a big decline in quality for Disney. However, audiences loved it and made it a big box office hit. It was rereleased in 1980 and 1987 and was released on home video for the first time in 1996.

My first exposure to The Aristocats was in 1996 when it came out on VHS. I remember being extremely excited to see a Disney animated classic that I had never seen before. And I remember loving it to the extent that we had plushes of the five main cats from Disney Store. Because I grew up with it, it's hard to see why critics were so harsh. But in their defense, they were comparing it to the Disney animated films that came before it and it does rank towards the bottom of that list. It fascinates me that the animation team was trying to spread their wings and do their own thing on this film, yet the final product has so much in common with both One Hundred and One Dalmatians and The Jungle Book. Both Dalmatians and this film are about household pets on the run from a villain. This film even ends with its own version of the Dalmatian Plantation. The Jungle Book is a string of chance encounters with interesting characters, which is basically how the cats spend their time on the run. It's completely unoriginal in its attempts to be different. The bottom line is if you don't love these characters, you won't love the film. Parts of George Bruns' score for this film sound surprisingly similar to another Disney cat movie, That Darn Cat, which was composed by Robert Brunner. Disney fans with a keen eye may spot Lady's hat box from Lady and the Tramp in the attic during "Ev'rybody Wants to Be a Cat." When the film was new, the Scat Cat band were regular walkaround characters at Disneyland and Walt Disney World. Each cat was a bright neon color instead of their natural fur colors. There used to be a shop in Fantasyland at the Magic Kingdom called The Aristocats (it is now Sir Mickey's) and there is currently a lounge at Disney's Port Orleans French Quarter Resort called Scat Cat's Lounge.

For the past decade, The Aristocats has grown exponentially in popularity. It has nothing to do with the story, the music, or the animation. Instead, it has everything to do with little girls obsessed with a white kitty wearing a big pink bow... Marie. The Marie craze started in Japan, where merchandise sold like Hello Kitty and the character began greeting guests at Tokyo Disneyland. Upon releasing similar merchandise here in the states, Disney quickly realized that American girls love Marie too. It is now common to see her at Magic Kingdom, Disneyland and Epcot. The character became so popular that a direct-to-video sequel was in the works in 2005 that would have featured Marie lost on her own in Paris. That sequel was shut down when John Lasseter took over Disney Animation, but I wouldn't be surprised if that idea resurfaces again someday.

The Aristocats is currently available on Blu-Ray, where it has been lovingly restored and is presented in widescreen 1.66:1 (although the original theatrical ratio was 1.75:1). This combo pack features a number of bonus features between the Blu-Ray and DVD, including deleted songs, an interview with the Sherman Brothers, an excerpt from a Disneyland episode called "The Great Cat Family," and a scrapbook. Because the film was created in fullscreen with the intention of being cropped in widescreen, some may prefer to view the full animated image. The only fullscreen DVD release was the Gold Collection DVD from 2000. However, the restoration is the same one done in 1996, which features dulled colors and scratches in the film.

Email ThisBlogThis!Share to TwitterShare to FacebookShare to Pinterest
Labels: Aristocats (The)