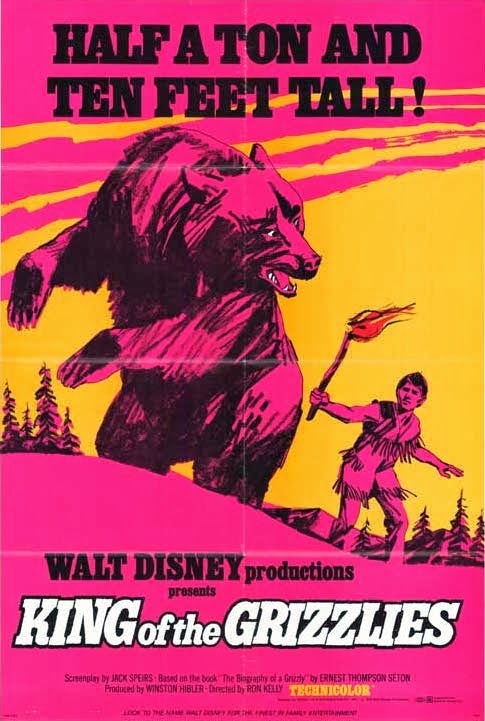 While Disney rarely had success with narrated live action movies starring animals, that didn't stop them from continuously making them. The tradition that started in the late 40's with the True-Life Adventures series morphed into story-driven films starring animals, such as The Incredible Journey and The Legend of Lobo. In these films, animals were the true stars with human actors taking a back seat, requiring a narrator to explain the thoughts and emotions of the animal actors.

Jack Spiers (Charlie the Lonesome Cougar) wrote the screenplay based on a book called The Biography of a Grizzly by Ernest Thompson Seton. Ron Kelly directs his only Disney film. Familiar voice Winston Hibler narrates and produced this film. The animal production crew spent two years filming Big Ted, a 7-year old bear who was rewarded with marshmallows for performing tricks. Like most Disney animal films, the cast featured unknown actors. Filming took place on location in the Canadian Rockies of Alberta and British Columbia.

In traditional Disney fashion, this film opens with a book, albeit a journal. The story starts with a young bear cub named Wahb and follows him as he grows up. A Cree Indian named Moki discovers Wahb one day while mapping the boarders of his ranch. Wahb gets himself into trouble on numerous occasions, such as stealing food from a black bear, an encounter with wolverines, and hunting Moki's cattle. Moki begins to set traps to stop Wahb, but the smart grizzly succeeds in destroying each of them. Because a bear is Moki's totem, when the two meet again they acknowledge each other as brothers. Wahb eventually becomes the biggest bear on the mountain, earning the title "Grizzly King." When the Colonel decides to hunt Wahb, he soon finds himself being hunted by the Grizzly King instead. It's up to Moki to save the Colonel by convincing his brother bear to step down.

King of the Grizzlies was released on February 7th, 1970. It didn't impress critics and didn't do particularly well at the box office. It made its TV debut on The Wonderful World of Disney in 1973 and was first released on home video in 1986.

As far as Disney animal films go, King of the Grizzlies is pretty mediocre. There are plenty of cute bear scenes in the beginning when Wahb is a cub, but the repetitive nature of the story gets tiring fast. It probably would have made a better episode of The Wonderful World of Disney. Similar themes from this film were better executed many years later in Brother Bear.

King of the Grizzlies was released on DVD in 2002 in fullscreen without any bonus features. The film quality was full of excess grain, colors were dull while scratches and artifacts plagued the print. Disney restored the film more recently and it is available in HD widescreen (1.77:1) through most digital media providers. This version still has scratches and artifacts, but grain has been reduced and colors are more stable.

Email ThisBlogThis!Share to TwitterShare to FacebookShare to Pinterest
Labels: King of the Grizzlies