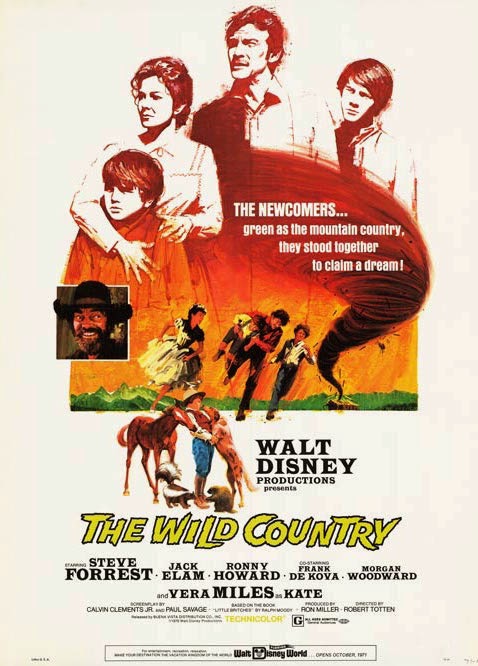 It may be surprising to modern audiences that Disney produced many Westerns throughout the 50's, 60's and 70's. They were sometimes more family friendly and silly like The Adventures of Bullwhip Griffin, but could also be quite serious and mature like Smith!. However, for all of their efforts their only true success with the genre was on television and neither Walt, nor the studio that he left behind, ever came close to matching the success of Davy Crockett. The Wild Country falls in the more serious category.

The film is based on a book called Little Britches: Father and I Were Ranchers by Ralph Moody, which was an autobiographical tale from when he was eight and was the first in a popular series. The screenplay was written by TV writers Calvin Clements and Paul Savage. Director Robert Totten was hired to direct, who was also specialized in TV and had done a few TV movies for The Wonderful World of Disney. Steve Forrest took top billing, who also played the dad in Rascal. But the most recognizable Disney star of the era was Vera Miles (Those Calloways, Follow Me Boys). Ron Howard, still known here as Ronny Howard, plays their eldest son and his brother Clint Howard plays the youngest. Their father Rance Howard has a cameo in this film, making it the first theatrical film they all appeared in together.

Filming took place entirely on location in Jackson Hole, Wyoming, which is also the setting of the story. Filming took place in the summer of 1970 over a seven week span. Seven wind machines were brought there from Walt Disney Studios and were used in combination with three snowplanes to create the tornado that appears on screen. 80 acres of greens had to be painted tan to give the illusion of drought.

The film begins with a stagecoach traveling through the country as the credits play. The Tanner family have moved from Philadelphia to Jackson Hole, Wyoming, to start a new life for themselves. However, they quickly find that their new home is broken down. They make the best of their situation, but things get even more complicated when they find out their neighbor, Ab Cross, has cut off the water supply to their farm. Jim, the father, attempts to establish rules in lawless Jackson Hole, a struggle that proves harder to do than it seems. They reach yet another setback when their home is damaged by a tornado. Just as they are about to give up, a court order arrives to legally settle the dispute with Ab Cross. In retaliation, he has their barn set on fire and when the family tries to put it out, Ab tries to shoot them. Eldest son Virgil steps in at the last second with a rifle to save the family. After his death, Ab's men step up to help the family rebuild their barn, feeling guilty for the part they played and the story ends on an optimistic tone for the future.

The Wild Country was released on January 20, 1971. The movie poster advertised that Walt Disney World would be opening that October. Critics were generally positive, praising the pacing and chemistry between the family actors. However, it was not a big draw and didn't do much at the box office. It made its TV debut on The Wonderful World of Disney in 1975 and was released on home video in 1986.

For a Disney film, The Wild Country is surprisingly violent and intense. But perhaps an even bigger surprise, it's a really great film. There are several scenes of hand-to-hand fighting with a bit of blood and the tension between the Tanner's and Ab Cross is much greater than your average Disney film. There are a few moments reminiscent of Old Yeller, particularly Clint Howard's character who is basically Arliss (always trying to catch animals, desperate to get a dog). There are also plenty of scenes of the family interacting with wildlife, including the birth of a filly. While this was Ron Howard's only on-screen role for Disney, he would have a great impact on the company with his directorial debut Splash in 1984, which launched Disney's less-family oriented division Touchstone Pictures.

The Wild Country is currently available on DVD as a Disney Movie Club Exclusive. The film is presented in full screen and is believed to be the original VHS master. The print has quite a few scratches and dust artifacts and the colors seem faded. There aren't any bonus features. This same version is available digitally from all major digital providers. It is one of the few Disney films that hasn't received a more recent HD restoration.

Email ThisBlogThis!Share to TwitterShare to FacebookShare to Pinterest
Labels: Wild Country (The)