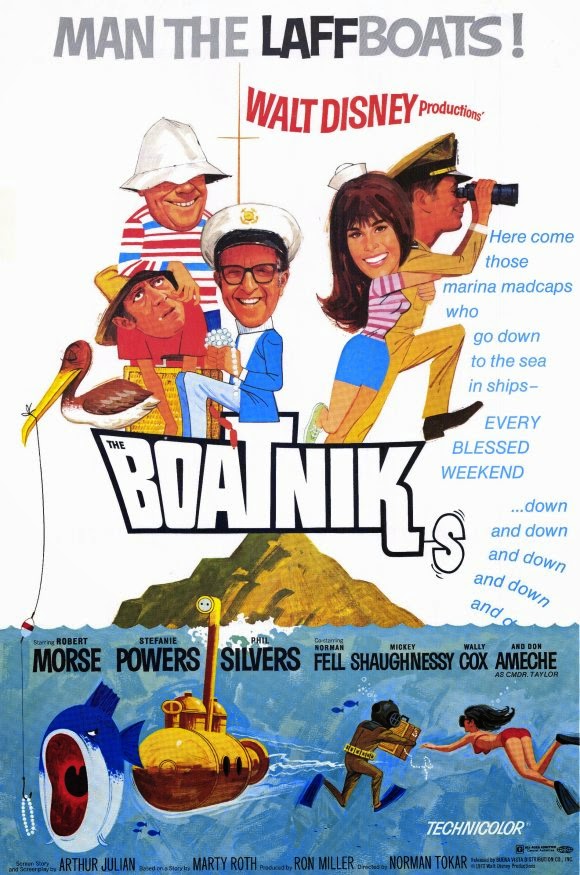 Walt Disney Productions started the 1970's focused mostly on getting Walt Disney World ready than anything else. With construction in full swing on the opposite side of the country, the studio continued to make films the way they thought Walt would have. The Beatniks seemed dated before it even came out and one has to wonder if the script had been conceived a decade prior (the term "beatnik" was no longer popular by the early 1960's).

The Boatniks has its roots in TV, with a story by Marty Roth and screenplay by Arthur Julian, both writers almost exclusively for sitcoms of the 60's and 70's. Director Norman Tokar, who had been one of Disney's top film directors since 1962, was also a TV veteran with nearly 100 episodes of Leave It to Beaver under his belt. Walt's son-in-law Ron Miller produced the film.

Robert morse was cast to headline the film, his only starring role at Disney. He is best known for starring in How to Succeed in Business Without Really Trying and was recently a series regular on AMC's Mad Men. Stefanie Powers plays his love interest, her first of two roles for Disney. Other notable actors include Phil Silvers, Norman Fell, Mickey Shaughnessy, Walley Cox and Don Ameche. While none of these names are familiar Disney faces, they would have been very familiar to audiences in 1970.

The film begins on the water where the coast guard is responding to the calls from pleasure cruisers who are having trouble with their boats, mostly caused by their own stupidity. As the previous skipper steps down, Ensign Garland relocates to take the job. At the same time, three jewel thieves are passing through his Southern California jurisdiction on their way to Mexico. In a coast full of beautiful women, Ensign becomes attracted to Kate, who teaches at a boating school. The two become close when Ensigns boat stalls and Kate rescues him. When the thieves lose their jewels at the bottom of the ocean, Kate is the first one to notice something suspicious with the trio. Unable to obtain the jewels themselves, the thieves fly in a Japanese pearl diver. Ensign and Kate spy on them as the confused diver brings up various items before finding the basket. Upon discovering that she learned English, the diver takes some of the jewels as payment for her silence. When Ensign sees her leave their hotel with a diamond bracelet, he is sure that these men are the jewel thieves he's heard about on the news. During a boat chase, the thieves steal a small submarine to get to their water plane to Mexico. Too heavy to take off, the thieves have to throw the jewels out of the plane to take off in time. Ensign recovers the basket of jewels and the Mexican authorities are notified to catch the crooks when they land.

The Boatniks sailed in to theaters on July 1, 1970. Critics bashed it, but audiences made it a financial success. It reappeared in theaters in 1972 as a double feature with Song of the South and had a standalone rerelease in 1977. It made its TV debut on The Wonderful World of Disney a year later in 1978 and debuted on home video in 1984.

For a zany Disney comedy, The Boatniks has few jokes that actually work. The side characters are all morons and the stupidity depicted is more annoying than humorous. Add to that an ending that literally stalls for ten minutes with nothing happening and you have a truly lackluster film. So much of the film was shot on noisy boats and docks that most of the audio was rerecorded in post production and the dialogue doesn't always align with the lip movements. The film carries a G rating, although if it were resubmitted today it would be PG for the amount of bikini-clad ladies and the way the men objectify them. There are jokes that today are considered racist towards Japanese and Mexicans and there is even a gay joke. For those who didn't grow up with this film, The Boatniks offers little more than a lot of nice looking boats.

The Boatniks was released on DVD in 2005 with a fullscreen presentation. Surprisingly, the disc featured bonus features in the form of the theatrical trailer and an outtake reel. The DVD used the previous VHS master, but a more recent restoration has been done. The film is available in HD widescreen (1.66:1) digitally from all major providers. The color palette feels muted, but it presents more detail than the DVD and is at least in widescreen, although the original theatrical ratio was 1.85:1.

Email ThisBlogThis!Share to TwitterShare to FacebookShare to Pinterest
Labels: Boatniks (The)