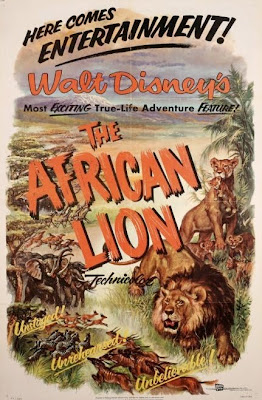 The 10th film in Walt Disney's True-Life Adventures series and the 3rd feature length film in the series focused its attention outside of the United States for the first time. The animals of Africa are the focus of this film, but the lion is the real centerpiece, hence the title The African Lion. It took the Milottes three years to film enough material to be edited into this film.

Like the other True-Life Adventures, a paint brush opens the film by painting the continent of Africa and explains the regions of the continent. The feature mostly tells the story of the lion and all of its prey, including zebras, wildebeest, and elephants. Other animals featured that lion's don't hunt include the African buffalo, giraffes, rhinoceros, and baboons. The films' most charming moments come from scenes of playful lion cubs and baby baboons. There is plenty of suspense as well, including lions killing and eating other animals, but it is all done in an effort to show the balance of nature and the circle of life.

Walt Disney's The African Lion is heralded by most as the best film of the True-Life Adventures series. While it isn't my personal favorite, it is entertaining. Unlike the previous feature films in the series, The African Lion wasn't nominated for an Academy Award, but it did win best documentary feature at the Berlin International Film Festival. It was released on September 14th, 1955, and was successful enough to have several theatrical re-releases. What sets The African Lion apart from the previous features is tat none of the action was staged, or "faked." In addition, the narrative takes on a much less slapstick approach to telling the story. Since 1955, many wildlife documentaries have tackled the same subject and with better execution. Today, it serves mostly as a nostalgic look back at the predecessor to modern Animal Planet programs. If anything, it will inspire you to watch Disney's The Lion King or ride Kilimanjaro Safaris at Disney's Animal Kingdom park in Walt Disney World.

The African Lion was released on DVD in 2006 as part of the Walt Disney Legacy Collection. It can be found on the third volume of the True-Life Adventures series where it has been fully restored. The DVD is now out of print, but copies are still easy to find. It is also available on iTunes in HD.

Email ThisBlogThis!Share to TwitterShare to FacebookShare to Pinterest
Labels: African Lion (The)