The Adventures of Bullwhip Griffin - 1967 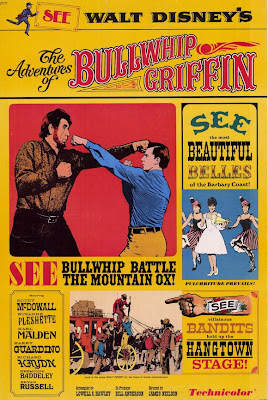 Walt Disney had made several Western Films, most of which failed to find mass appeal. But this never stopped him from trying. Of the Westerns made during Walt's era, The Adventures of Bullwhip Griffin rises to the top for it's appealing cast and humor. This is not your typical cowboy vs. indians film, but focuses on the gold rush as the setting for a comedic adventure about an out-of-place butler. The source material is a book called By the Great Horn Spoon by Sid Fleischman. Walt Disney wasn't alive at the time of it's release, but it was nearly completed when he passed away the previous December and the marketing for the film says "Walt Disney's."

Bullwhip Griffin was the last Disney film directed by James Neilson, whose other Disney work included Zorro, Summer Magic, Bon Voyage, and The Moon-Spinners. Lowell S. Hawley adapted the screenplay, having previously done Swiss Family Robinson and Babes in Toyland for Disney. Roddy McDowall returned to the studio after a small role in That Darn Cat, but this time in the lead role of Bullwhip Griffin. Suzanne Pleshette also returns to the studio following her role in The Ugly Dachshund. Her younger brother is played by Bryan Russell, who was Emil in Emil and the Detectives. And Disney character actress Hermione Baddley, most famous for her role as Katy Nana Mary Poppins, also makes an appearance.

Most of the animated visual effects were done by animation legend Ward Kimball. The role of Quentin Bartlett was originally played by Tony Hancock, who was recast with Richard Hayden (voice of the caterpillar in Alice in Wonderland) due to behavior problems on set. All of the interior sets were built on the studio lot and the exterior town was custom built on the backlot. A lot of location shooting was also done around California and at Golden Oak. Matte paintings were made by Peter Ellenshaw and the Sherman Brothers wrote the theme song.

The film begins with animated credits and a themed Buena Vista logo. Eric Griffin is a butler for the Flagg family in Boston. After the passing of the master of the house, the family learns that they are penniless which causes grandson Jack to run away to California to join the gold rush. Eric follows after him and gets wrapped up in the adventure, sailing with the boy to San Francisco. On their voyage, Jack meets a man with a map to a secret gold site, but he is being followed by a charlatan intent on stealing the map. Shortly after arriving in California without any money, Griffin sets up a hair cut business and gets into a fight with a thug named Mountain Ox. After knocking him out with a glove full of gold nuggets, he becomes a local legend known as Bullwhip Griffin. The owner of the local saloon offers him $2,000 to hold a rematch at his saloon, which Griffin turns down to head to the gold field. When the crooked man steals the map, Griffin and Jack have to save him from execution to get it back. When Jack's sister Arabella finds out what happened, she too sets out for California. She ends up working as a saloon singer and the boys meet up with her after being robbed. To get some money back, Griffin agrees to the match with Mountain Ox. With a strategy to dodge his blows and tire Ox out, Griffin ends up winning the match through luck and also wins the hand of Arabella. The film ends with the continuation of the ballad explaining how Bullwhip Griffin built the city of San Francisco with the money he made from the fight.

The Adventures of Bullwhip Griffin premiered on March 3, 1967, and was released on March 8, 1967. Critics were mixed on it. Those that disliked it claimed the plot was slow and too drawn out. Those that praised it cited great performances, comedy and effects. It was a box office failure and debuted on TV in 1971. It's home video debut was in 1986.

This is one of my favorite Disney films from the 1960's. The lovable characters, tall-tale ballad narrative, and unique comedy is outstanding. On top of Ward Kimball's zany animated interludes, there's a great recurring gag in the first quarter of the film involving a portrait of Jack and Arabella's grandfather. The portrait has a stern face at times, but when something happens that he would find humorous, the portrait has a huge grin. It hasn't achieved the fan base that it deserves, but hopefully this post will encourage others to give it a viewing.

The Adventures of Bullwhip Griffin is currently available on DVD. The film is presented in widescreen 1.66:1. This may be the original theatrical ratio, but the standard for Disney during this era was 1.75:1 which is most likely the correct ratio. There aren't any bonus features on this release. The film is also available on iTunes in widescreen in HD and standard definition. It is unlikely to get a Blu-Ray release, so this is one of the few ways to get it in HD.

Email ThisBlogThis!Share to TwitterShare to FacebookShare to Pinterest
Labels: Adventures of Bullwhip Griffin (The)