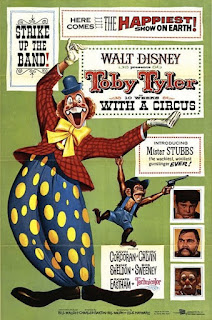 Walt Disney loved making movies about the turn of the century most likely because it reminded him of his own childhood. He made quite a few during his lifetime, but Toby Tyler stands out as one of the best. The film is based on a children's book of the same title by James Otis Kaler, which was published in 1880. It is possible that Walt read this book as a child, which may have sparked his interest in adapting it as a feature.

Charles Barton was brought on to direct after having spent several years at Disney directing episodes of Zorro in addition to installments of the Disneyland series and most notably, The Shaggy Dog. Kevin Corcoran headlined the film as Toby after already making a name for himself at Disney. By this time, he had already starred in Old Yeller and The Shaggy Dog in addition to becoming a regular member of The Mickey Mouse Club, where he was known as "Moochie." Gene Sheldon and Henry Calvin would also have been familiar faces due to their supporting roles on Zorro. Most of the movie was shot at Disney's Golden Oak Ranch, with city scenes being filmed on the backlot at the Disney Studios.

Toby Tyler is an orphan boy taken in by his poor aunt and uncle. He gets in trouble for neglecting his chores when the circus comes to town, causing his uncle to say things he doesn't mean. As a result, Toby runs away to join the circus. He is hired by the head Concession salesman (a "concessionaire") and is treated as an outcast by the other circus children, who are performers. He manages to make friends with a few adults and a chimp named Mr. Stubs. Toby gets his moment to shine when one of the horse riders gets injured and he fills his place as a performer. When he learns that his uncle is sick, he runs away with Mr. Stubs. After some commotion, he and Mr. Stubs return to the circus where his aunt and uncle have heard of his success and come to see him perform.

Toby Tyler, or Ten Weeks with a Circus was released on January 21st, 1960. Critics raved about the film, praising Disney for his simplistic representation of circus life. Despite critical acclaim, Toby Tyler failed to find success at the box office. It was never re-released theatrically, but enjoyed some success in TV airings.

I first saw Toby Tyler as a kid when my mom rented it for me. I instantly fell in love with it. In fact, I hid the VHS and told my mom I lost it so that I could keep it, since it wasn't available for sale to the general public. And while this film is sure to delight children, it packs a lot of charm and humor for adults as well. I've seen it more times than I can count and I still enjoy it a lot. Disney fans should note that the credits say "Introducing Ollie Wallace." Oliver Wallace was Walt Disney's main composer and he wrote the score for most Disney films of this era. In the film, he plays the orchestra conductor. If you ever find yourself in Baraboo, WI, be sure to visit the Circus World Museum. The historic circus wagons that Walt Disney bought and refurbished for Toby Tyler and later reused in parades at Disneyland have retired there.

Toby Tyler was released on DVD in 2005 and is still available in that format. As is typical for Disney's DVD releases for older films, the DVD doesn't contain any bonus features. In addition, most Disney films of this time were filmed in fullscreen with the intentions of being matted into widescreen in theaters. The DVD presents the fullscreen version, which is not the original theatrical ratio. It is available on iTunes in widescreen, where it is also available in HD.