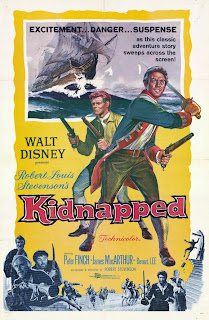 Walt Disney had already made quite a few action adventure films by 1960, so audiences should have come to expect this type of movie from him. As in most of his previous efforts, he once again turned to classic literature as his source material. This time a novel called Kidnapped by Robert Louis Stevenson. The first all live action Disney film was another Stevenson adaptation, Treasure Island.

Walt chose a familiar director in Robert Stevenson, who had previously directed Johnny Tremain, Old Yeller, Darby O'Gill and the Little People in aditon to episodes of Zorro. He would go on to be Walt's primary director, eventually directing Mary Poppins. Peter Finch was a famous actor in England and was familiar to the Disney studio since he played the Sheriff of Nottingham in Disney's The Story of Robin Hood. James MacArthur was still under contract with Disney, having already starred in The Light in the Forest and Third Man on the Mountain. Like Disney's earliest live action films, Walt chose to shoot on location in the UK and hired a primarily English cast and crew.

When David Balfour's father dies, he is sent to live with his Uncle Ebenezer. When David learns that his uncle has stolen his father's property that should belong to him, Ebenezer tricks him into boarding a ship intent on selling him into servitude. The ship ends up colliding with another boat and they are forced to take on the lone survivor, Alan Breck Stewart. David leans of a plot to kill Alan and warns him. Together they take over the ship and Alan convinces David to help him get to land outside of the British ruling. To return the favor, Alan helps get a confession out of Ebenezer so that David can have the property and money his father left for him. The film ends as Alan leaves David to go on another adventure.

Kidnapped was released on March 25th, 1960, although some cities opened it earlier on February 24th. US critics agreed that it was well made, but the general consensus was that for an adventure film it was rather dull. There were also complaints that the story was at times unclear and confusing to viewers. It found little success in the states. In the UK, however, critics praised it for staying truthful to the literary classic on which it was based and it enjoyed much more success there.

While I tend to agree with the US critics on their opinion of Kidnapped being somewhat dull and having a few scenes that slow the story down, I also enjoy the film. I feel it has enough redeeming qualities to outweigh the negatives. It has great performances by all of the cast, including Peter O'Tool in a in his first on-screen role. It is incredibly well made and the location shooting really adds to the visual richness of the film. And Peter Ellenshaw delivers some great matte paintings to deliver some of the more impossible shots. If you're a fan of other Disney adventure films from this era, you're sure to enjoy Kidnapped as well.

Kidnapped was released on DVD in as a Disney Movie Club Exclusive. A wider release hasn't been given yet. Like most DMC Exclusive DVDs, this film has no bonus features, or even chapter listings. The transfer is the same one used from the VHS, so the film is plagued by excess grain, color flickering and artifacts that a restoration would have helped. The film is also presented in fullscreen, which was likely not it's original theatrical aspect ratio since by this time most films were released in widescreen. However, we are lucky to have access to this film at all.

The film is also available on iTunes, where it is also in fullscreen.

Email ThisBlogThis!Share to TwitterShare to FacebookShare to Pinterest
Labels: Kidnapped