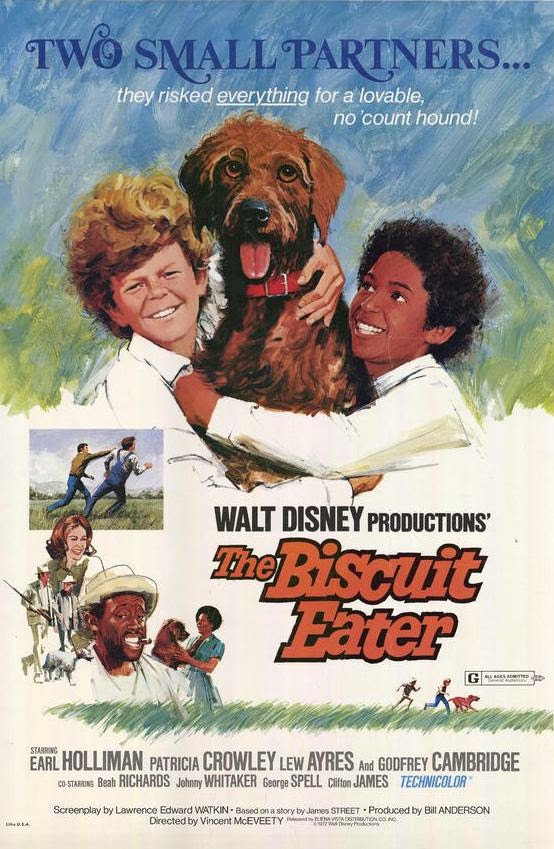 Walt Disney Productions had adapted many great novels to the screen that had been previously made by other studios. In that respect, you could say that when Walt made his version of Treasure Island, Robin Hood, or 20,000 Leagues Under the Sea they were all remakes. However, the first all-out remake the studio ever did was in 1972 with The Biscuit Eater. It was a short story by Bill Street that published in 1939 in The Saturday Evening Post. Paramount made a feature-length film version in 1940, which is considered the first "sleeper hit" because it cost little to make, had no big stars, but was a big success at the box office. While it was made thirty years earlier, the original was frequently shown on television. So modern audiences in the early 70's would have been familiar with the story.

Disney's screenplay was written by Lawrence Edward Watkin, who retired shortly after. His other Disney writing credits include Treasure Island and Darby O'Gill and the Little People. Director Vincent McEveety took on a more serious endeavor than Million Dollar Duck with this film. Johnny Witaker was a familiar face from TV's Family Affair when he was cast in his first of three Disney films. He is the only actor in this film that would become a familiar Disney face, although audiences would have also been impressed by Lew Ayres, star of the famous Doctor Kildare series at MGM. He fell out of favor in Hollywood after being vocal about his displeasure in being drafter for World War II.

1972 was an interesting time for the Walt Disney Company. Roy O. Disney passed away at the end of 1971, just months after Walt Disney World opened. His second in command, Donn Tatum, took over as chairman and CEO of the company while his son Roy E. Disney remained an executive. The Sherman Brothers steared clear of the studio after Bedknobs and Broomsticks because it had become a much different environment than they experienced when Walt was alive. They didn't have to look far for the next studio songwriter, Shane Tatum (Donn's son) wrote his first song "Moreover and Me" for this film and sings it as well.

The film begins with footage of Lonnie and his dog playing while the theme song plays. Lonnie's been trying to teach his dog how to point to help him hunt, but the dog is too smart and spoiled to do it. Lonnie's dad forces him to give the dog to the local gas station owner. Behind his dad's back, Lonnie convinces his best friend Text to take the dog and they name him Moreover. The boys train him well, but the dog's desire to eat eggs gets him into trouble when he sneaks into a neighbor's yard and almost gets shot. They enter Moreover into a competition where he competes against the dog Lonnie's dad trained. Moreover would have won, but Lonnie called him the name he hates ("biscuit eater") to make the dog run off fearing his dad would lose his job as a dog trainer if he lost. The boys lose the dog and their mean neighbor poisons him, but thankfully he survives and the film ends with a promise to enter him in next years' competition.

The Biscuit Eater was released on March 22nd, 1972. Unlike the 1940 version, critics downgraded it to just another film about a boy and his dog and didn't see much heart in it. Audiences, perhaps because the original was available on TV in reruns, didn't flock to the theater to see it. It made its Wonderful World of Color debut in 1976 and surprisingly wasn't released on home video until 2002, when it was released simultaneously on VHS and DVD.

While mostly entertaining, the biggest problem with The Biscuit Eater is that it's not very memorable. It never tugs at your heartstrings, but it has good pacing and an appealing cast. It also deserves to be applauded for having a racially diverse cast, something that was fairly rare for Disney films. It's the second Disney film to have an African American lead actor (the first was Song of the South way back in 1946). It's never stated and isn't immediately obvious, but the film is supposed to take place in the 1930's. You can tell if you pay close attention to the appliances, automobiles and the fact that nobody has a television set. This is definitely a film from a different time where the boys have a rifle and use it while hunting unsupervised. However, gun safety is at least brought up in a scene soon after the boys acquire the rifle. While the dog is often called a "biscuit eater" as an insult, he never once eats a biscuit in the film (only eggs). The dog who plays Moreover was a German wire-haired pointer named Ralph Von Wolfgang. He belonged to a tree trimmer who worked at Disney's Golden Oak Ranch, where most of the movie was filmed.

The Biscuit Eater is currently available on DVD where it is presented in fullscreen with occasional dust and excess grain in the print. A more recent restoration was done and is available digitally on iTunes. The film looks much better now, but still has some imperfections.

Email ThisBlogThis!Share to TwitterShare to FacebookShare to Pinterest
Labels: Biscuit Eater (The)