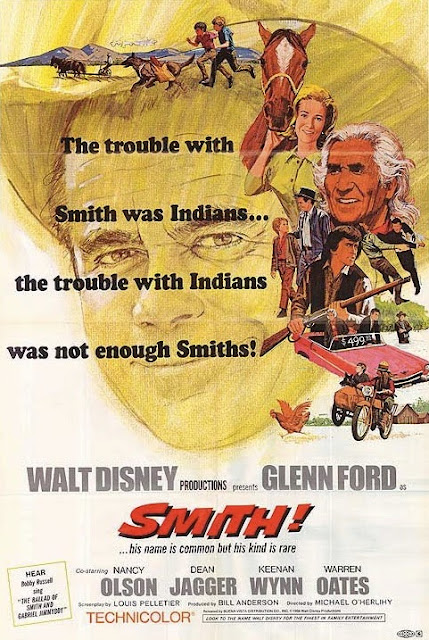 Walt Disney had a lot of success with Westerns on TV, but his theatrical efforts had previously disappointed. Films like Westward Ho, the Wagons and Ten Who Dared were critical and box office failures. But with the studio still making films the way Walt would have, under the leadership of his brother Roy O. Disney, it was inevitable that the genre would be revisited. The source material was a book called Breaking Smith's Quarter Horse by Paul St. Pierre.

Michael O'Herlihy directs his third and final Disney film. Louis Pelletier adapted the screenplay, his final theatrical film for Disney. Iconic film star Glenn Ford was signed on for his only Disney film to play the lead role. Nancy Olson returns to the studio, after memorable roles in Pollyanna and The Absent-Minded Professor. Her costar from Professor, Keenan Wynn (son of Ed Wynn) also returns for this film. Two songs in the film are written and performed by Bobby Russell.

The film begins with a song about Smith set to Native American drawings on a wooden board depicting the story. Smith arrives at his farm after a disappointing hunt for meat. His wife tells him that she suspects the murderer Jimmy Boy is living with their Native American friend Antoine in his shack nearby. His wife is upset that Smith gives so much of their stuff to their neighbors, but Smith says if he doesn't nobody else will. Antoine is hiding Jimmy Boy and asks Smith to sneak him to Canada, but Smith convinces him to stay and wait for a trial. When a reward of $500 is offered for Jimmy Boy's capture, Antoine turns him in and collects the cash, since Jimmy Boy was going to willingly go to trial anyway. He buys a car with the money, but the breaks are shot and he quickly gets in a wreck. He is thrown in jail after accidentally pleading guilty to being drunk, meaning he won't be able to testify for Jimmy Boy. Smith has to borrow money from his wife to pay the $10 bail. A translator is present at Jimmy Boy's trial, but Antoine is uncomfortable and Smith ends up substituting midway through the prosecution. Following the trial, Smith is placed in jail for thirty days for getting into a fight with the sheriff. When Antoine reveals to the judge that he can speak English, he is able to convince the judge to let Smith go free. The film ends with Smith's friends arriving to help him cut his hay crop, a gesture of true kindness and friendship.

Smith! was released on March 21st, 1969. Released during a time when Native American rights were a hot button issue and shortly after congress passed the Indian Civil Rights Act, Disney was quiet with their marketing efforts. Critics ignored the film and so did audiences, making it a box office failure. Surprisingly, Disney chose not to air it on their weekly series and it wasn't made available again until 1987 when it made its home video debut.

This film breaks Disney traditions in many ways. It's a story about racism and one man passionate enough to speak out in favor of freedom for all. It's about corruption in a small town where those in power refuse to recognize new laws. It's a much better film than the title would suggest and holds up as a unique entry in the catalogue of Disney films. Producer Bill Anderson was striving to attract a more adult audience with this film, recognizing the importance of appealing to more than just kids or families. This was years before the studio would add a division for that very purpose with the creation of Touchstone in 1984. The original working title was A Man Called Smith.

Smith! is currently available on DVD as a Disney Movie Club exclusive. A nice restoration was done and the film is presented in widescreen, but there aren't any bonus features. It is also available digitally exclusively on amazon, where it can be purchased in HD on select devices (amazon does not allow HD on iOS devices).

Email ThisBlogThis!Share to TwitterShare to FacebookShare to Pinterest
Labels: Smith!