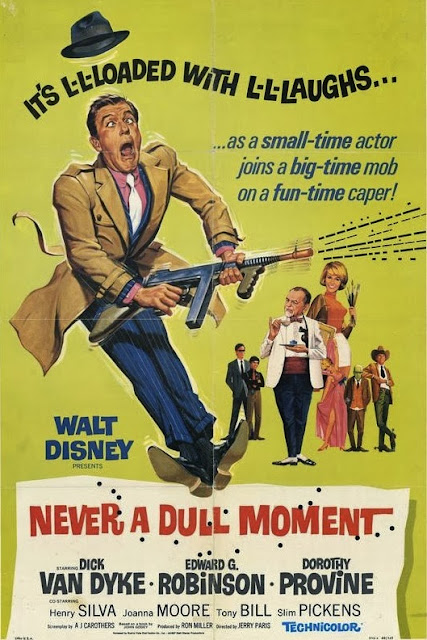 When Walt Disney was alive, he had formed a friendship with Dick Van Dyke, a comedic actor who believed in clean family entertainment. He signed him to a film contract and was looking for another project for him before passing away. That project would be a book called Never a Dull Moment by John Godey.

Jerry Paris was hired to direct his only Disney film because he was a leading director (and costar) of The Dick Van Dyke show. The production team felt that he would be capable of bringing out the best performance from Van Dyke. AJ Carothers adapted the screenplay, his last for Disney. For Van Dyke, this would be his final Disney branded film (although he was in Touchstone's Dick Tracy in 1990). Gangster film icon Edward G. Robinson plays the head of the mob. Dorothy Provine returns to the studio one final time after a memorable role in That Darn Cat. Slim Pickens also returns to the studio after Savage Sam and Disney TV westerns. Walt's son-in-law Ron Miller produced this, his first film with full producer credit (he co-produced several films including Summer Magic).

The film begins with two crooks and a hostage in a surrounded building when the one crook kills the other. It turns out these are actors in a TV show and the killed crook is a bit-part actor named Jack Albany. While still in costume on his way home, he gets mixed up with a mob who think he's Ace Williams, one of the leading gangsters in the world. When he meets the head of the mob Joe Smooth, he is receiving art lessons from a pretty girl who recognizes him from TV. The crime he is to assist in performing is to steal a 40 foot famous painting from the Manhattan art museum. When Sally the art instructor stumbles into the meeting, she is forced to stay the night along with the rest of the mob involved in the heist. That night, the real Ace shows up. Unsure who is the real one, Joe Smooth locks them both in a room alone and decides that whoever comes out alive must be the real Ace. It just so happens that Sally was hiding in the same room and she knocks the real Ace out. After a short discussion, Sally convinces Jack that the best way to save their lives is for him to keep pretending to be Ace and hope to break free at the museum. When he is discovered as a phony at the museum, a mad cap chase includes with a climax on a giant spinning mobile. After setting off the fire alarm, their plan is foiled and the gangsters are arrested. Jack and Sally get their happy ending, with Jack leaving to call his agent as he is about to make headlines for his good deed.

Never a Dull Moment was released on June 26th, 1968. In its original release, it was paired with the classic short The Three Little Pigs. Critics bashed the over-the-top acting and noted the lack of comedic moments in this Disney comedy. It made $4 million in its initial release. It was rereleased in 1977 packaged with The Three Caballeros and made its TV debut in 1979. It was first released on video in 1985.

If you're a Dick Van Dyke fan and enjoyed Lt. Robin Crusoe, then I recommend Never a Dull Moment as a follow up. While there are a few highlights in the film and I enjoy the performances, especially Dorothy Provine, this film doesn't measure up to the more well known Disney comedies of its era. Also for a film called Never a Dull Moment, there sure is an awful lot of sitting around and talking with long breaks between key action sequences. In the early scenes where Jack is acting on TV, you can see the interior walls of the Disney soundstage where the scene was filmed. This film features some amazing matte paintings to double local LA and the Disney Studio for New York City. Director Jerry Paris from The Dick Van Dyke Show makes a brief cameo as a police officer towards the end of the film.

Never a Dull Moment is currently available on DVD where it is presented in widescreen. The original theatrical trailer is included as a bonus feature. It is also available on iTunes, where it is offered in HD.

Email ThisBlogThis!Share to TwitterShare to FacebookShare to Pinterest
Labels: Never a Dull Moment