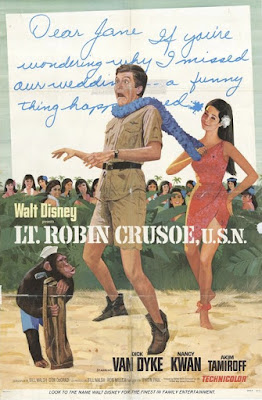 Walt Disney and Dick Van Dyke hit it off during production on Mary Poppins and Walt Disney was very eager to work with him again. He had also been interested in doing something with the Robinson Crusoe story by Daniel Dafoe and it was his idea to do a modern spin on the tale. He even receives a credit for the story, which appears on screen as Retlaw Yensid, his name backwards. Top Disney story men Don Dagradi and Bill Walsh took the idea and wrote the screenplay for what became this film. Walt's son-in law Ron Miller co-produced the film.

Dick Van Dyke's friend Byron Paul was given the directorial duties for his first and only Disney film after directing several specials for The Wonderful World of Color. Chinese actress Nancy Kwan was cast as Van Dyke's love interest on the island and Akim Tamiroff plays her father. There aren't many familiar Disney faces other than Van Dyke mostly due to the exotic setting needing to seem unfamiliar to audiences. Most of the film was shot on location in San Diego with some interior scenes filmed indoors at the Disney Studio.

The film begins with footage of a naval aircraft carrier as the credits play. An aircraft lands and Robin Crusoe gets out wearing a straw hat and tattered clothes. He immediately starts writing a letter to his former fiance apologizing for missing their wedding and the amount of time they've been apart. As he starts his explanation, we flashback to a year prior when his plane caught fire over the ocean and he had to parachute into the ocean with an inflatable raft. After several days at sea fighting off sharks, he washes up on an island. He builds a crude shelter and explores the island hoping to find people. He comes across a rusted Japanese submarine and discovers a chimpanzee that he names Floyd and he takes anything useful from the ship. After building a better shelter and spending many days playing games with Floyd, Robin finds a footprint that isn't his and follows it to a rock that looks like a face. There he meets Wednesday, an island girl who tries to kill him. He takes her captive to learn more about her and discovers that her father is the chief and she ran away to get out of an arranged marriage. Wednesday's sisters and cousins soon run away as well and Robin trains them for the imminent war against the rest of the tribe. Robin hides in the rock face with a microphone from the submarine to amplify his voice when Chief Tanamashu comes to ask his god questions. His secret is quickly revealed, but after a series of boobie traps, Tanamashu agrees to give the women their rights. At the celebration, Robin dances with Wednesday and Tanamashu, not realizing that it is a marriage dance. He runs away and is pursued by all of the girls just as a helicopter arrives to rescue him and Floyd. It turns out Floyd was a space chimp that they'd been looking for.

Lt. Robin Crusoe, U.S.N. premiered on June 29th, 1966 on the Kitty Hawk, the aircraft carrier used for filming. The crew of the ship were the only guests invited who weren't involved with the film. It was released to general audiences on July 29th when it was paired with the live action short Run, Appaloosa, Run! Critics were mostly harsh on the film, citing faults in both the writing and Van Dyke's performance. However, audiences flocked to see it based on its great premise and Dick Van Dyke's popularity and it was a hit, grossing over $8 million. It was rereleased to theaters in 1974 and made its home video debut in 1986.

As a Dick Van Dyke comedy, its easy to see why critics were disappointed. There are very few genuine laughs to be found. However, the twist on the Robinson Crusoe story is entertaining and as a fan of Disney films from this era, its hard to not get swept up in the fun of it all. It's by no means one of the studio's best films, but it is entertaining and easy to see why it was so successful. It is interesting to note that Akim Tamiroff, who plays dark skinned Tanamashu, is actually a white man. Some of the firework effects used in the battle sequence are recycled from Mary Poppins. Dick Van Dyke also gives a nod to that film when he does a dance and sings "Um-diddle-iddle-iddle-iddle-um-diddle-i" from "Supercalifragilisticexpialidocious."

Lt. Robin Crusoe, U.S.N. is currently available on DVD. A minor restoration was done and it is free of any major flaws. The film is presented in fullscreen, although it was originally shown in widescreen, most likely at a ratio of 1.75:1. There aren't any bonus features. The film is also available on iTunes, where it is presented in widescreen and in HD. It is unlikely that Disney will select this film for Blu-Ray treatment, so this may be the only way to own it in high definition and its original aspect ratio.