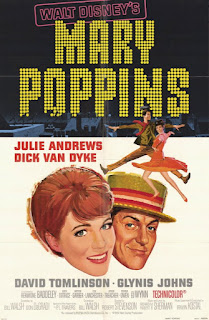 Walt Disney had spent his career trying to make the best possible product in whatever field he was working in. By 1964, he had found great success in animation, live action films, television, theme parks and world's fairs. He had been looking for a project that would allow his staff to combine all of their talents in one place and the opportunity finally came around when, after many years of asking, P. L. Travers finally signed over the film rights to her Mary Poppins books. The film would require his live action filmmakers, animators and theme park Imagineers to work together on a greater scale than had been done before.

The Mary Poppins books first caught Walt's attention in 1938 when he read them to his daughters. Author P. L. Travers had no interest in a film version of her books, but Walt didn't give up and personally visited her in 1961 and convinced her to give him an option on the film. He immediately had the Sherman brothers start writing songs and Bill Walsh did a screenplay. Travers made many changes before accepting a version and officially signing over the rights. Directing the film was given to Robert Stevenson, famous for Old Yeller and The Absent-Minded Professor among his many other Disney films. Julie Andrews was cast in the lead role after Walt saw her perform on the Ed Sullivan Show and flew to New York to see her in a performance of Camelot. Dick Van Dyke caught Walt's attention not because of his fame on television but because of an interview he did where he expressed that he wanted to see more films made for the entire family. This was one of Walt's philosophies and this was the first of several films Dick made at Disney. Karen Dotrice and Mathew Garber were cast while filming The Three Lives of Thomasina. Walt personally wanted Glynis Johns to play Mrs. Banks, who had starred in some of his earliest live action films The Sword and the Rose and Rob Roy. Glynis wouldn't sign on until the Sherman brothers wrote a song for her to sing in the film. Walt and director Robert Stevenson watched several British films and David Tomlinson caught his eye for Mr. Banks, his first of several Disney films. Disney favorite Ed Wynn was also cast in the supporting role of Uncle Albert. Principal photography took place from May to September of 1963.

Mary Poppins is very stylized and was shot entirely indoors on the Disney Studio lot. Similar to Babes in Toyland, Walt wanted the sets to look like a Broadway stage show. Peter Ellenshaw painted over 140 matte paintings for the film. Before the invention of blue and green screen, a sodium vapor screen was used to put the actors in the cartoon world during the "Jolly Holiday" sequence. The "Step In Time" number took a week to film and had to be redone due to a scratch on the film. Dick Van Dyke plays dual roles as Bert and Mr. Dawes Sr. He had to convince Walt that he could convincingly play an old man.

The film opens with a panning shot of London as the credits play. Eventually we find Mary Poppins applying her makeup on a cloud. The camera zooms down to a park in London where jack-of-all-trades Bert is serving as a one man band. He leads us to 17 Cherry Tree Lane, home of the Banks family as their current nanny is about to quit. When Mr. Banks gets home, he writes up an advertisement for a new nanny. When his children Jane and Michael write their own, he tears it up and throws it into the fireplace. The next morning a line of stern nannies are waiting outside number 17 when a strong wind blows them away and Mary Poppins flies down with the children's torn up list of requirements. A dumbfounded Mr. Banks hires her and her first task is to unpack and get the kids to clean their nursery. They are reluctant until she teaches them that it can be a game if they look at it the right way, and it doesn't hurt that she uses a bit of magic to get the job done as well. On an outing in the park, they meet up with Bert who is now a sidewalk chalk artist. Mary takes the children and Bert into one of his drawings where they have a "Jolly Holiday" and win a horse race on merry-go-round horses. The next day, everyone at 17 Cherry Tree Lane is cheerful and happy except for Mr. Banks. Mary and Bert take the kids to Uncle Albert's where they have a tea party on the ceiling and learn that too much of a good thing can be bad. That night Mr. Banks tries to scold Mary Poppins for all of the frivolous outings shes been taking the children on and she puts the idea in his head that he take them to the bank with him. She also tells the children about the bird woman near the bank and teaches them a lesson in charity. Mr. Banks refuses to let Michael waste his money on birds and takes his tuppence. When he screams "Give me my money" in the bank, other customers begin to panic and demand their money. The kids run off into the streets and run into Bert, who is now a chimney sweep. He takes them home and they reunite with Mary Poppins. When Michael gets sucked up the chimney, they all travel up on the rooftops of London and meet other chimney sweeps for a dance party. When they are fired at by their neighbor Admiral Boom, all of the chimney sweeps drop down the chimney at number 17, creating a chaotic scene for Mr. Banks to walk in on. After kicking all of the chimney sweeps out, he receives a call from the bank asking him to come down and accept his termination. Through a conversation with Bert, he begins to realize that he hasn't been there for his children and when he arrives at the bank, his attitude has changed. He tells his boss a joke that Michael heard from Uncle Albert. The wind changes and so Mary Poppins must leave just as Mr. Banks returns home singing and calls for his children. He fixed their kite and takes them out to fly it, where he meets his bosses son and discovers that his boss died laughing from his joke. He is offered his job back with a promotion. The film ends with the happy family completely rejuvenated as Mary Poppins flies away.

Mary Poppins had its world premier on August 27th, 1964 at the Chinese Theater in Hollywood. It opened to the general public on August 29th. Critics gave it unanimously glowing reviews and audiences flocked to see it again and again. It cost $6 million to make, the most expensive live action film the studio had ever done, and made $31 million in its initial domestic release. The film was nominated for 13 Academy Awards and won 5 for Best Actress (Julie Andrews), Best Song ("Chim Chim Cher-ee"), Best Score, Best Visual Effects and Best Editing. It was rereleased in theaters in 1973 and 1980. It made its home video debut in 1980 and was the first Disney film released on DVD in 1998.

Its not hard to see why Mary Poppins was so well received and has remained popular all these years. It's a delightful film that fills every viewer with warm fuzzy feelings by the end. For children, its full of great lessons hidden in fantastic adventures. For adults, its a warning to not let life pass you by while worrying about things that aren't as important as they seem. You would be hard pressed to find someone who hasn't at least heard of Mary Poppins and it is an important part of most childhoods. Due to its long runtime, the film had an intermission in certain international releases. Julie Andrews was cast in The Sound of Music during production when the filmmakers came to the studio to watch Mary Poppins dailies. Author P. L. Travers was reportedly so upset with the final film that she left the premier in tears. However, she returned to the studio in the late 1980's to work on a script for a sequel that never happened. Upset with the Disney treatment of her books, she sold the stage rights to Cameron Macintosh, who realized he couldn't do it right without the Disney songs. In 2004, a stage version premiered in London as a collaboration between Disney and Cameron Macintosh. The story in the stage version is closer to the books, while still using some of the most memorable songs from the film mixed with some new ones for the show. It made its Broadway debut in 2006 and has been very successful in London, New York and on tour around the world.

Mary Poppins is currently available on blu-ray in a 50th Anniversary Edition. The only new bonus feature is a featurette about Saving Mr. Banks, but the presentation is fantastic. All of the bonus features from the previous 2-disc 45th Anniversary Edition are included here. Bonus features new to that edition were all about the Broadway show, including a behind the scenes look, the complete "Step in Time" number and an art gallery. The rest of the bonus features are from 2004's 2-disc 40th Anniversary Edition, which includes a making of documentary, conversations with the Sherman Brothers and Julie Andrews and Dick Van Dyke, a piece about the premier, a deleted musical number, audio commentary and pop-up trivia track. The film is presented in widescreen 1.66:1, which Disney claims is the original theatrical ratio. While the original theater exhibitor book didn't specify an aspect ratio, most live action Disney films from this era were released in 1.75:1. The previous DVD releases from 1998 and 2000's Gold Collection release presented the film in 1.85:1, which gained picture on both sides rather than losing image from the top and bottom. There is some controversy as to what aspect ratio Disney should have used.